The Navy and Marines participated in San Francisco Fleet Week. There was no Fleet Week event in 2013 because the Federal Government decided to pare expenses. I have been going to Fleet Week over the years, and it has always been an enjoyable event. Here are some pictures I took while at Fleet Week 2006 and here are some pictures I took while on a cruise on the SS Jeremiah O’Brien during May 2003. The Jeremiah O’Brien is a Liberty Ship, and she is docked in San Francisco.

This year I decided to cover more ground before I arrived at the San Francisco Marina to view the Blue Angels do their fabulous close-quarter acrobatic flying. I took the Muni Metro to the West Portal Station and began my trek from that location. I walked through the lovely Forest Hill neighborhood; I then I ascended Mount Sutro and proceeded to drop down Mount Sutro past the University of California San Francisco Medical Center. Then a quick stop for a bite to eat at Whole Foods in the Haight-Ashbury district. Now satiated, I walked through the Jordan Park neighborhood and then the Laurel Heights neighborhood. From there, I proceeded to climb Divisadero Street, walking through the Pacific Heights neighborhood. And then, finally, at around 2 pm I dropped down Divisadero Street to the Marina District and the Fleet Week extravaganza which was in progress. By the way, it was twenty-five years ago this week, on 17 October 1989, that the Loma Prieta earthquake struck. The majority of the damage in San Francisco occurred in the Marina District. 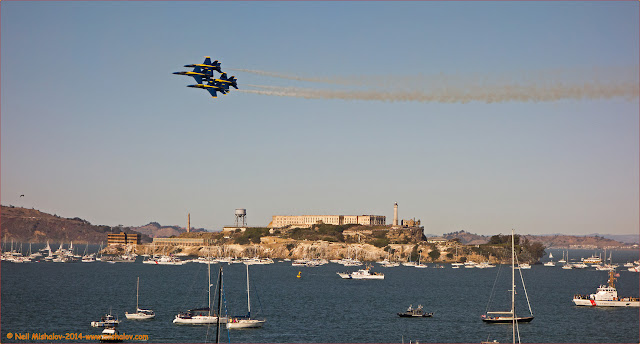 The Blue Angels. Note the four Coast Guard vessels and the cleared channel in the Bay over which the jets are flying.