Across San Francisco, thru the Tenderloin, and into Downtown: 7 December 2014

I walked across San Francisco from west to northeast on a cloudy Sunday.
I started the walk near the San Francisco Zoo; just a few blocks from the Pacific Ocean. I then headed north through the Sunset District, crossed through Golden Gate Park, and entered the Richmond District. I then continued on Geary Boulevard, traveling east through the Anza Vista District and the Western Addition Neighborhood. I stopped in Japantown for a bite to eat. Afterwhich, I continued east on Post Street and entered the Tenderloin District. After the Tenderloin, I entered the Union Square area and then finished the walk at the Ferry Building.
Click on an image to view the full-size photograph. 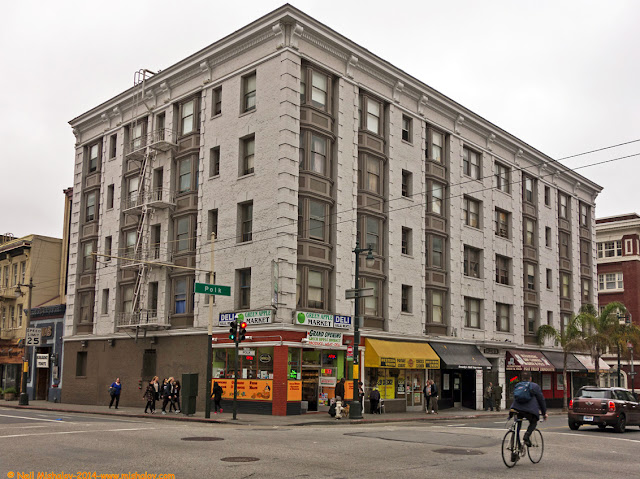 This apartment building is located at 1036 Polk Street. It has 36 living units.
"A camera is a tool for learning how to see without a camera.” Dorothea Lange
"Photography has not changed since its origin except in its technical aspects, which for me are not important." Henri Carter-Bresson
"There are always two people in every picture: the photographer and the viewer." Ansel Adams
"The important thing is not the camera but the eye." Alfred Eisenstaedt
The first volume of the San Francisco Bay Area Photo Blog contains galleries of photographs that were posted on the Internet between 2002 and 2011. Click Here to view those photos.
Question or comment? I may be reached at neil@mishalov.com
Posted by Neil Mishalov