The San Francisco Bay Trail and the opening of the Ferry Point Loop Trail in Richmond: 31 May 2015

Two new components of the San Francisco Bay Trail were officially opened in Richmond. The additions were made to the Point Richmond area of the Bay Trail. The new changes to the trail network enabled the East Bay Regional Park District to open a new trail loop: The Ferry Point Loop Trail. I decided to go to Point Richmond on Sunday to participate in the "Grand Opening Schedule of Festivities." The event took place across the street from the Richmond Plunge. After the grand opening celebration, I decided to ramble about and see what was done to the Bay Trail. The improvements are helpful; they promote safety and will be appreciated by both pedestrians and bicyclists. One of the improvements was widening the walkway/bike path that goes through the Richmond Ferry Tunnel. The other improvement for bicyclists and pedestrians provides a second access route to historic Kaiser Shipyard 3.

“A camera is a tool for learning how to see without a camera.”-Dorothea Lange
You are welcome to visit my primary website  www.mishalov.com

The Excelsior District of San Francisco: 24 May 2015 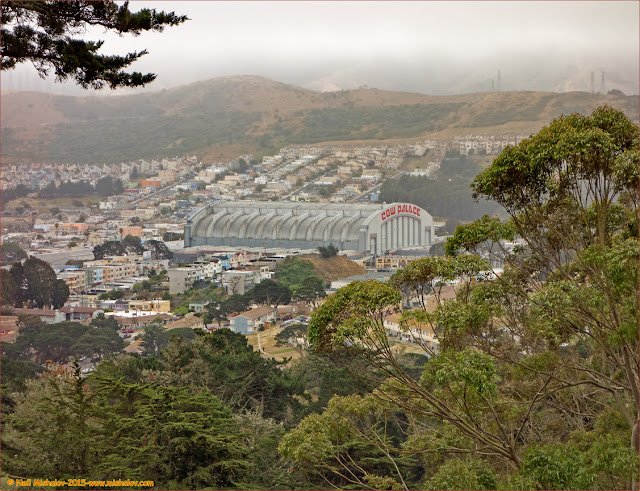 The Cow Palace is located in Daly City. This snap was taken from John McLaren Park. This view is looking south.

A light drizzle was falling when I arrived at the West Portal Muni Metro Station. It was cool, foggy and somewhat windy. A perfect spring day in San Francisco!

“A camera is a tool for learning how to see without a camera." Dorothea Lange

You are welcome to visit my primary website at  www.mishalov.com

I have participated in the San Francisco Bay to Breakers foot race more times than I can remember. The last time I did the race was in 2004. Here are three different photo galleries from 2002, 2003 and 2004 races.

Today I boarded the 6:17 am BART train at the North Berkeley Station and arrived at the San Francisco Embarcadero Station at approximately 6:41. The first thing I did when I disembarked was to go to the Peet's Coffee shop in the Ferry Building for a cup of java. I then walked over to the start of the race on Howard Street. The race started at 8:00 am, and the official estimate is that there were approximately 50,000 registered and unregistered people who entered the race. The weather was overcast and cool. This was the 104th year that the race has been held.

It was a great race with views of people in fascinating and unusual costumes. This being San Francisco, some of the runners ran naked... yes, the only thing they were wearing were running shoes. Many of the naked runners would have looked much better if they were wearing clothing. 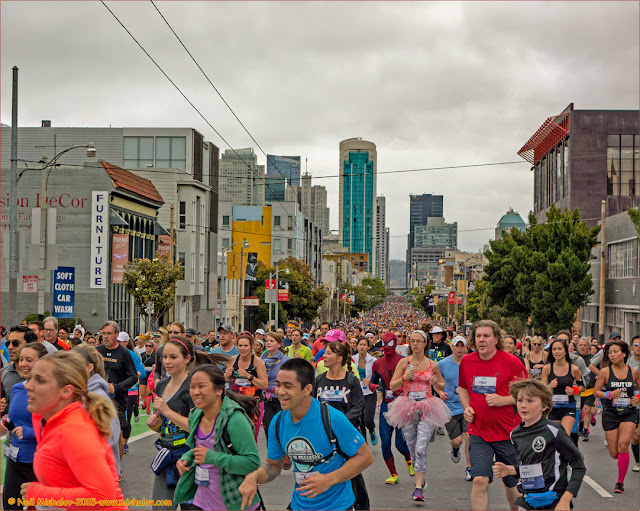 A view looking back down Howard Street. This location is approximately 1.5 miles into the race.