In the 1880s, large tracts of land located on San Francisco's Outside Lands were purchased by Adolph Sutro. Mr. Sutro was a German immigrant who had earlier built Sutro Tunnel. The tunnel was a drainage tunnel designed to drain the excessively hot water from the deep underground silver mines of the Comstock Lode, located in Virginia City, Nevada.

Adolph Sutro became a permanent resident of San Francisco after the Comstock Lode Tunnel in Virginia City had been completed. He constructed many landmarks in San Francisco that are popular to this day. The Sutro Baths, the Mount Sutro Forest, the Sutro Heights Parapet, Mount Olympus, and other resources were made available to San Francisco's people. Thank you, Adolph Sutro!

Adolph Sutro arrived in the United States on 21 November 1851. He married Leah Harris in 1856; they had six children, four girls, and two boys. Adolph Sutro died in 1898. The executor of his estate was one of his daughters. She was a medical doctor: Dr. Emma Sutro Merritt. It took Dr. Emma Sutro Merritt more than ten years to settle her father's estate. She did an excellent job; her father's name is still remembered and widely respected, one hundred and nineteen years after his death.

I began this ramble by taking a few pictures at and around the Ferry Building downtown San Francisco. All of the below photographs were taken amid a multi-day storm which provided the parched Northern California terrain with much-needed rain and snow. I used a waterproof camera to take the photos.
Click on an image to see the full-size photograph. 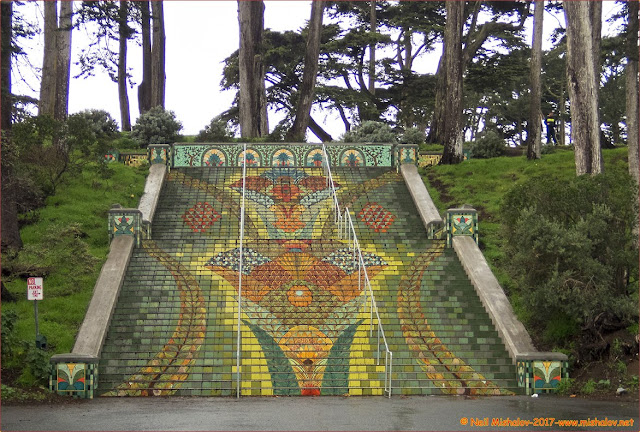 A view of the Lincoln Park Steps. The steps were constructed in the early 1900s. In May 2015, a celebration was held for the beautiful and delightful mosaic tile work.

An Olympus TG-4 camera was used to take these photographs.