This was a ramble in the Sunset District of San Francisco. A brief review of the Symbionese Liberation Army is included at the bottom of this posting.
Click on an image to see the full-size photograph. 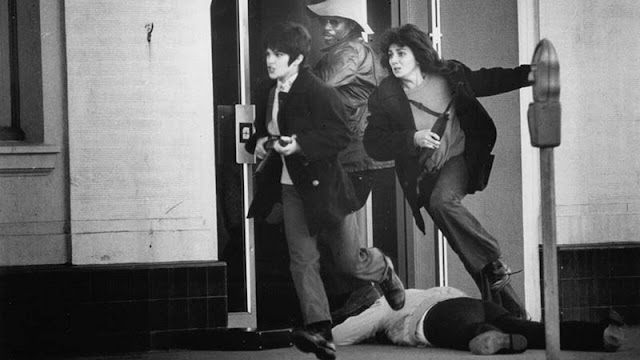 On April 15, 1974, Patty Hearst was seen on a bank surveillance camera. She was armed with an M-1 carbine rifle, holding up a branch of the Hibernia Bank along with several Symbionese Liberation Army members. The robbers shot two people in the bank and stole more than $10,000. Nancy Ling Perry, Donald DeFreeze, and Patty Hearst are visible from left to right. They are running out of the bank and jumping over one of the two people they shot during the robbery. Both people survived their gunshot wounds. 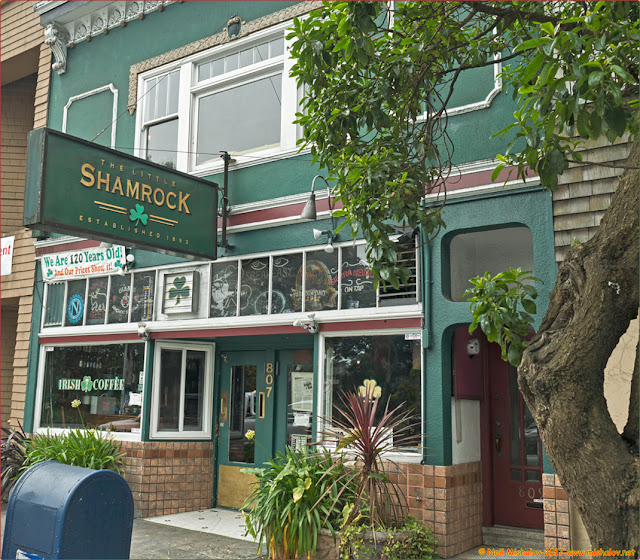 NOW  The Little Shamrock Irish Pub was established in 1893 by J.P. Quigley. 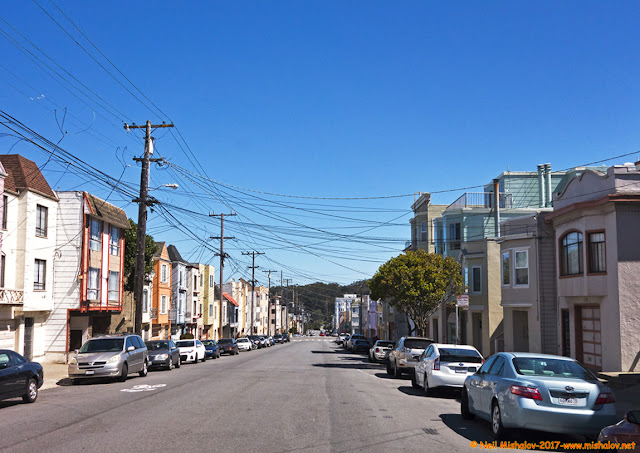 NOW  The streetcar tracks are gone, and cars now rule Twentieth Avenue. Golden Gate Park is ahead. This photo was taken on June 16, 2017. 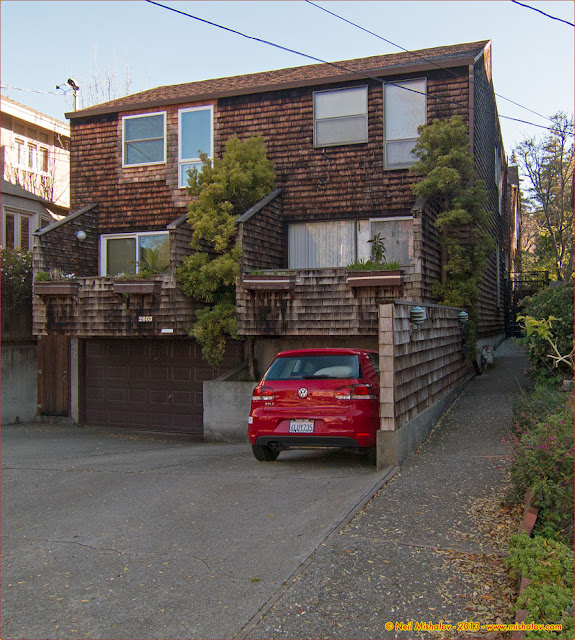 This is 2603 Benvenue Avenue, Berkeley, California. In 1974, Patty Hearst was a student at the University of California, Berkeley. She and her boyfriend lived in apartment #4 in this apartment complex. This photo was taken in 2013. 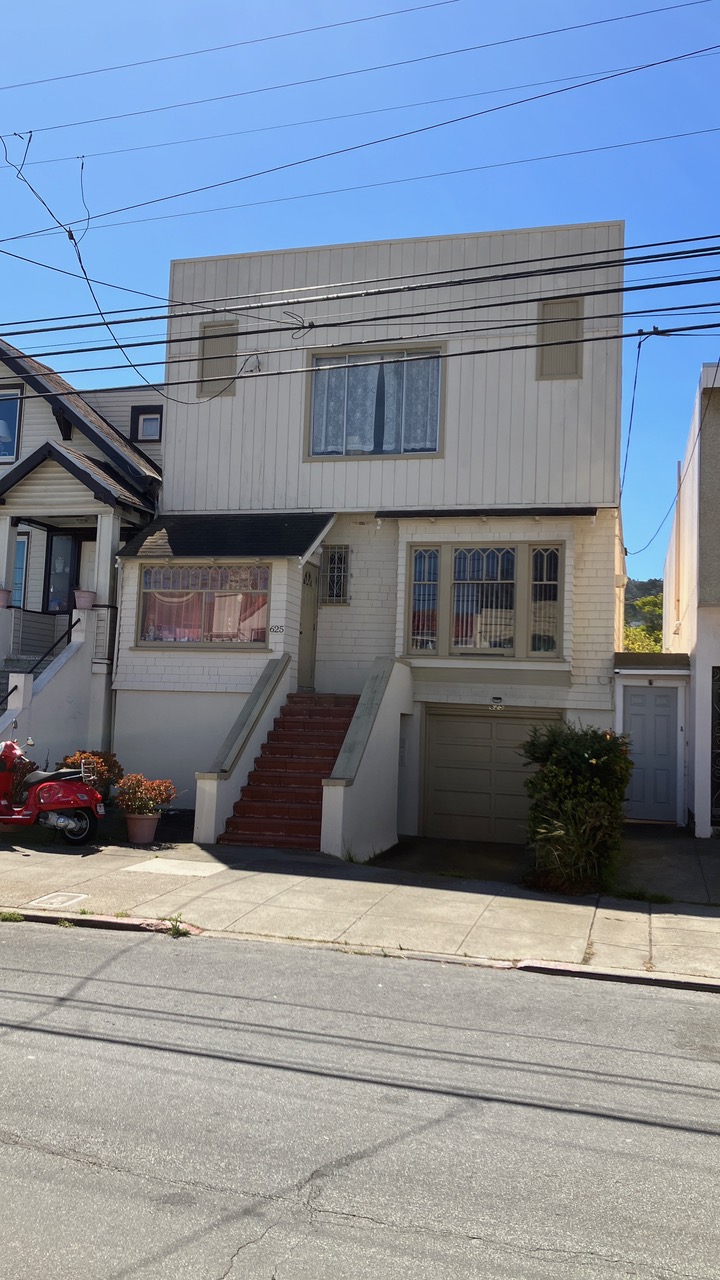 
This is how the F.B.I. describes the moment when Patty Hearst lost her anonymity forever:


"Around 9 o'clock in the evening on February 4, 1974, there was a knock on the door of apartment #4 at 2603 Benvenue Avenue in Berkeley, California. In came a group of men and women with their guns drawn. They grabbed a surprised 19-year-old college student named Patty Hearst, beat up her fiancé, threw her in the trunk of their car, and drove off. Thus began one of the strangest cases in F.B.I. history."

Strange, indeed. Hearst's kidnappers were part of a small group of self-styled revolutionaries called the Symbionese Liberation Army. The group distinguished itself with slogans like "death to the fascist insect that preys upon the life of the people."
But the group was no joke. In November 1973, members ambushed and murdered Oakland school superintendent Marcus Foster, the district's first African-American school superintendent. Why did they murder Foster? The S.L.A. branded him a fascist because it mistakenly believed he had backed a plan to require I.D. cards for all Oakland high school students.

Three days after the kidnapping, the S.L.A. announced they were keeping Hearst as a "prisoner of war." They imprisoned her in a small studio apartment at 1827 Golden Gate Avenue in San Francisco.


The Hearst kidnapping transfixed the nation as it took one strange, scarcely believable turn after another. Shortly after Hearst's disappearance, the S.L.A. demanded that the Hearst family undertake a massive food distribution program throughout California as a condition for the release of the kidnapped heiress. The Hearst family agreed with the demand and put together an effort that, by February 22, made its first food distribution within San Francisco.

It was a disorganized disaster. Scores of people were injured as panicked workers threw food boxes off moving trucks as vast crowds of people unexpectedly showed up for the food. The S.L.A. issued a "Communique" the next day demanding that a community coalition be put in charge of the effort.
Patty Hearst issued a series of tape-recorded verbal messages over a few weeks. Among other things, she criticized her family's poor response to the food distribution demand. Eventually, she declared she had joined the revolution and that "I would never choose to live the rest of my life surrounded by pigs like the Hearsts."
Patty Hearst was captured in San Francisco on September 18, 1975, and was arrested along with Wendy Yoshimura. They were hiding in a house located at 625 Morse Street in the Outer Mission District. On January 15, 1976, Patty Hearst stood trial for bank robbery. Her attorneys argued that fearing for her life, she began to sympathize with her captors. On March 20, 1976, she was convicted of bank robbery and sentenced to seven years in prison. In 1979 President Jimmy Carter commuted her federal sentence to the twenty-two months she had already served. She was then pardoned.

GO HERE to view part two of The Sunset District, Then & Now.

San Francisco's Sunset District (Then and Now), written by Lorri Ungaretti, helped in the assemblage of this then-and-now photograph gallery.

The first volume of the San Francisco Bay Area Photo Blog contains galleries of photographs posted on the Internet between 2002 and 2011. Click Here to view those photo galleries. 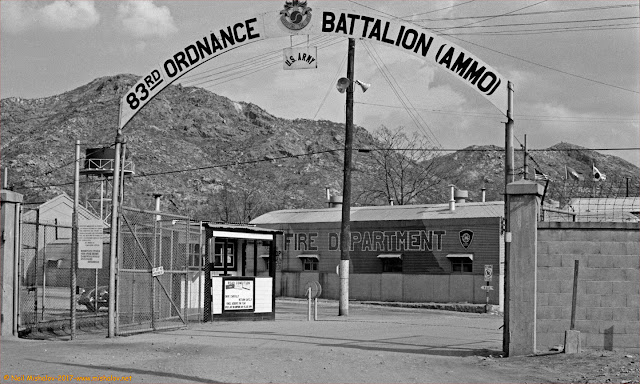