The Presidio of San Francisco: February 2020 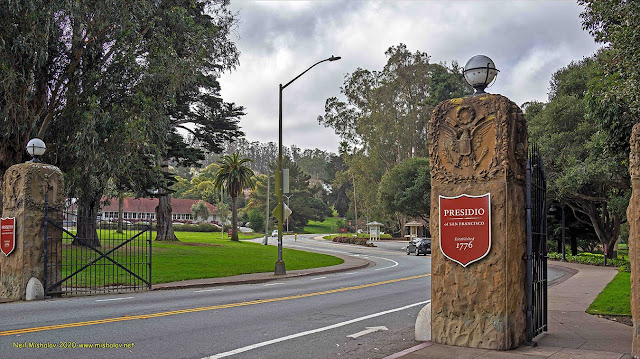 This is the Lombard Street entryway to the Presidio. 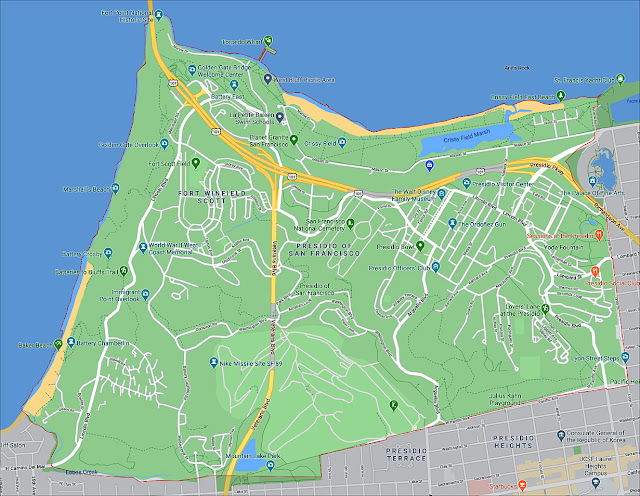 A map of the Presidio.

This is a photo of the Presidio of San Francisco. The view is looking east, and the southern terminus of the Golden Gate Bridge is visible. The Presidio is California Registered Historical Landmark #79. 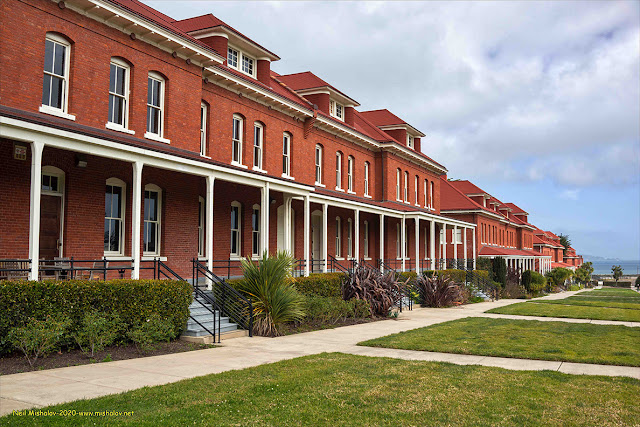 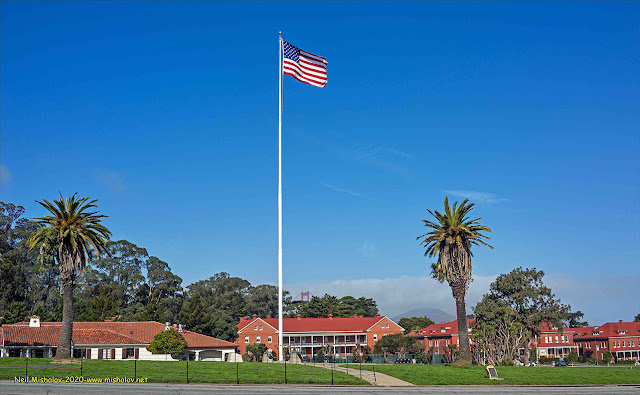 This 105-foot-tall flag pole has a sad history. The flagpole marks the site where General John J. Pershing, his wife, his three young daughters, and his young son lived in government housing that befits a General. Tragedy struck on Friday night, 27 August 1915, when hot coals spilled from the hearth of the fireplace and landed on the highly waxed floor. Flames quickly consumed the house; Mrs. Pershing and her three daughters perished in the fire. Only five-year-old Warren survived after being rescued from his upstairs bedroom by a soldier who climbed into the room through a window. General Pershing was temporarily stationed at Fort Bliss, Texas. Mrs. Pershing and her three daughters were buried in Wyoming, the state where Mrs. Pershing was born. 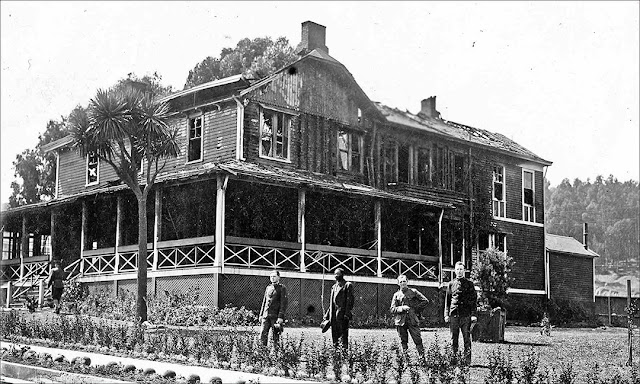 On 13 January 1914, General John Joseph "Black Jack" Pershing (1860-1948) took command of the 8th Infantry Brigade at the Presidio of San Francisco. General Pershing, his wife Frances, and their three daughters and one son lived in this house, which was located near the Main Parade Ground of the Presidio. At that time, tensions were running high on the border of Mexico and the United States. Pancho Villa (1878-1923) was a Mexican revolutionary general leading raids against US border communities; he was assassinated in Mexico on 23 July 1923.

The Army sent General Pershing and the men of the 8th Infantry Brigade to Fort Bliss, Texas, with orders to capture or kill Pancho Villa. General Pershing's wife and children continued to reside in the Presidio at this house when General Pershing was transferred to Texas. 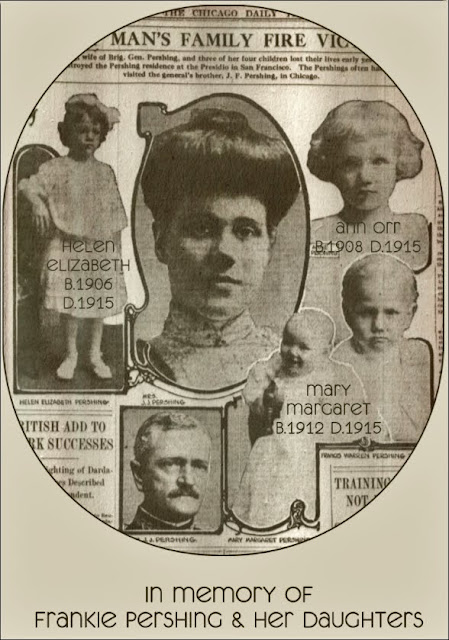 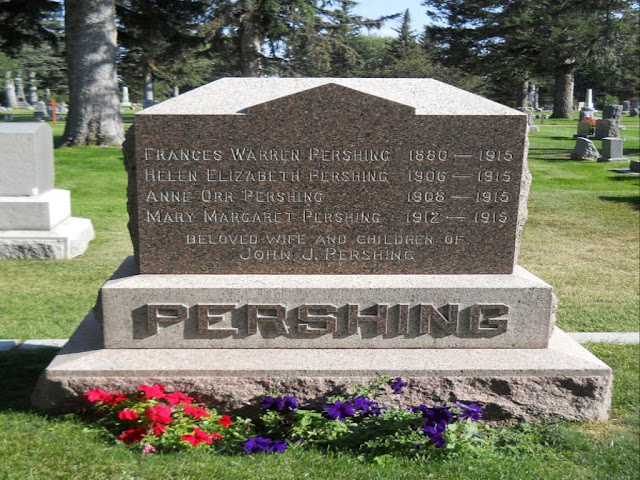 This is the gravesite of Frances Warren Pershing and her three daughters, who are buried in Lakeview Cemetery, Cheyenne, Wyoming. Frances was the daughter of  Wyoming Senator Francis Emroy Warren. Senator Warren (1844-1929) was a Civil War Congressional Medal of Honor recipient.

Warren Air Force Base, named in honor of Senator Warren, is located near Cheyenne, Wyoming, and one of three US strategic-missile bases. 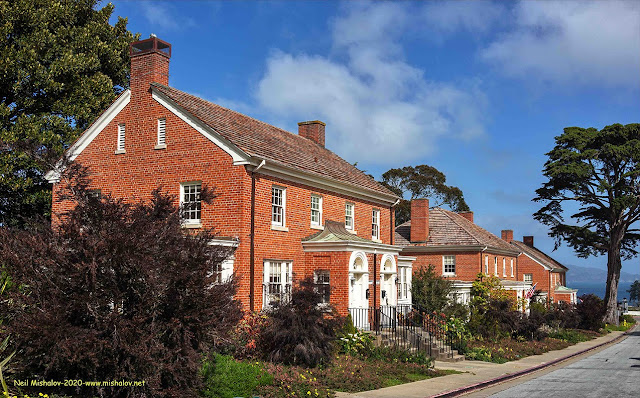 Here is a view of housing on Sergeants' Row. Visible are three Georgian Revival-style duplexes constructed in 1931 for non-commissioned officers and their families. 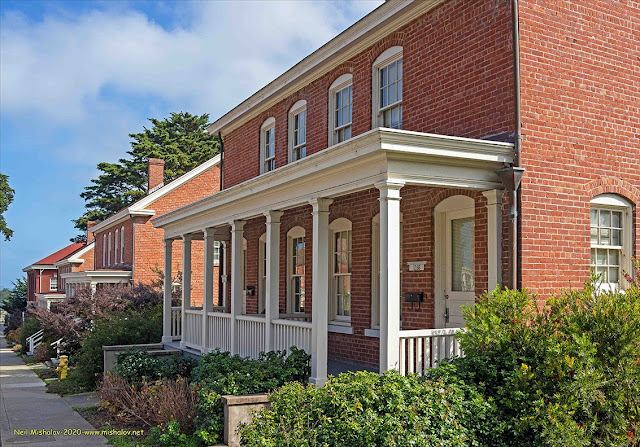 This is another view of Sergeants' Row. These are duplexes constructed in 1909. They were built when the Army initially provided separate quarters for sergeants, corporals, and families. Each unit has a living room and kitchen on the first floor and two bedrooms and a bathroom upstairs. Electric lights were added to each apartment in 1912. 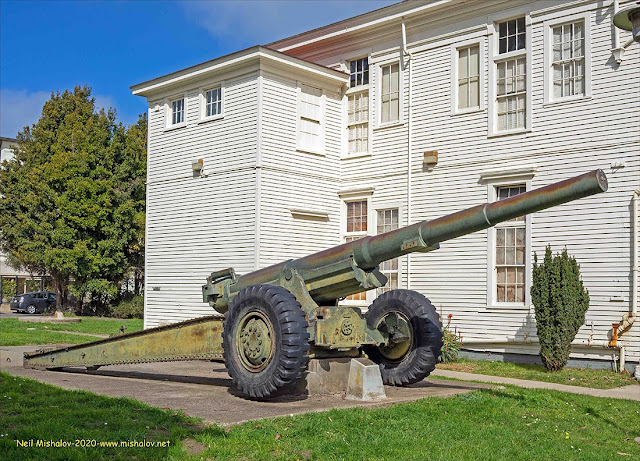 This French 155mm gun (Grande Puissance Filloux) fired a 95-pound projectile with a maximum range of approximately 10 miles. During World War II, this gun was in service by the US Coast Artillery. 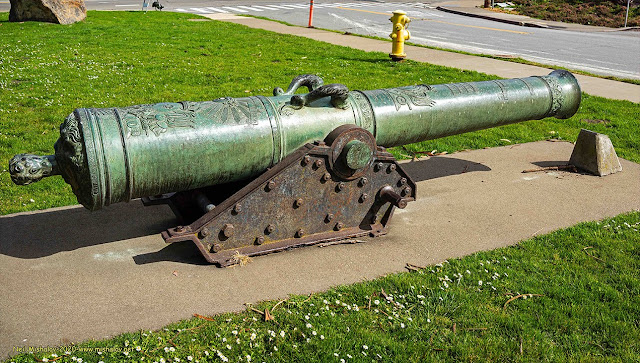 This French 24 Pounder gun was cast in bronze in 1754 for the French Army. The weapon was used by Spanish troops during the Spanish-American War. It was captured in 1898 by American forces located in Cuba. 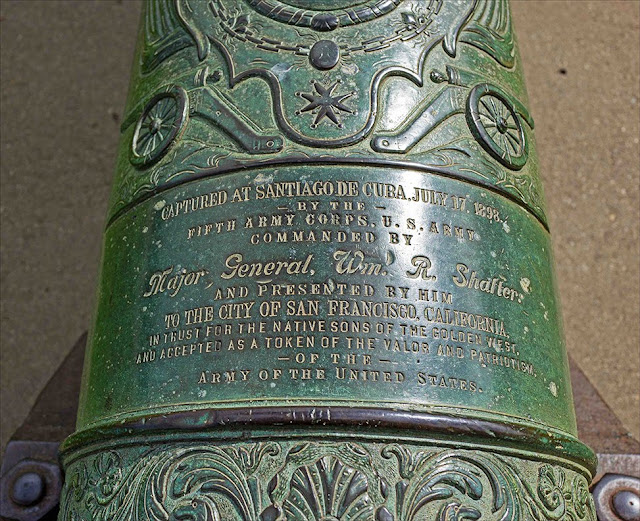 This is a close-up view of the French 24 Pounder gun, which has an embossed message from Major General William Rufus Shafter. 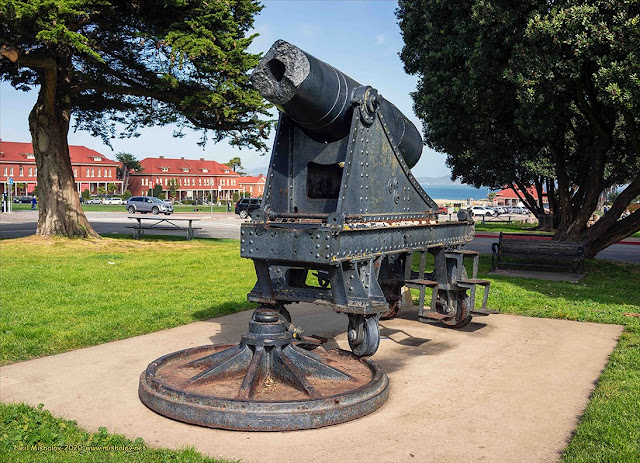 Here are the remains of a 150mm Spanish coastal artillery gun designed in the late 19th Century by Salvador Diaz Ordonez. This gun was originally mounted in a Spanish coastal fort at Subic Bay in the Philippines. Undamaged during the Spanish American War, the weapon was captured by Filipino nationalists. In September 1899, a combined US Army-Navy force attacked the Filipino positions at Subic Bay. This gun was reported to have been destroyed by shellfire from the American cruiser USS Charleston. 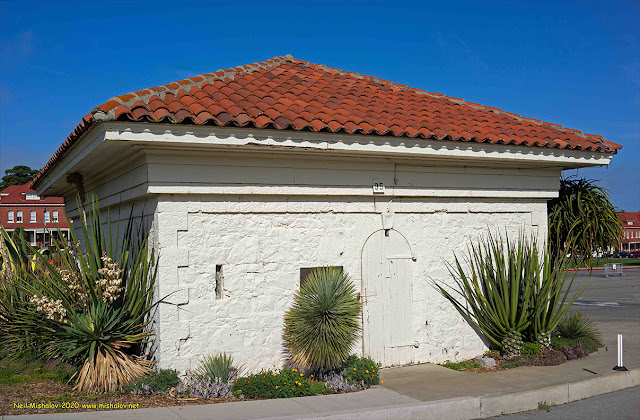 Here is a view of the Old Stone Powder Magazine. The US Army constructed it sometime between 1847-and 1863. 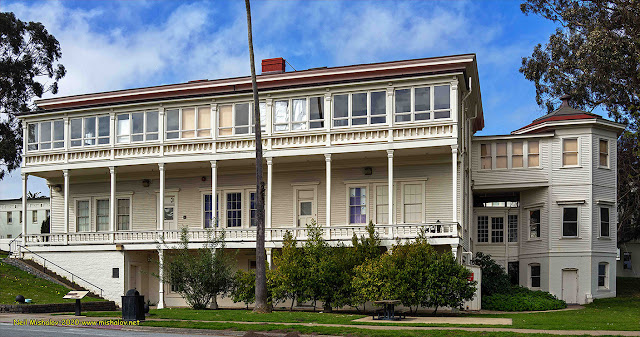 This building was constructed in 1864 during the Civil War. It is now known as the Old Post Hospital and is one of the oldest standing buildings in the Presidio. It was initially known as the Wright Army Hospital. The octagonal structure on the right was constructed in 1897 and was originally used as a surgical area. After Letterman Army Hospital opened in 1899, the octagonal structure was used as a dental office. 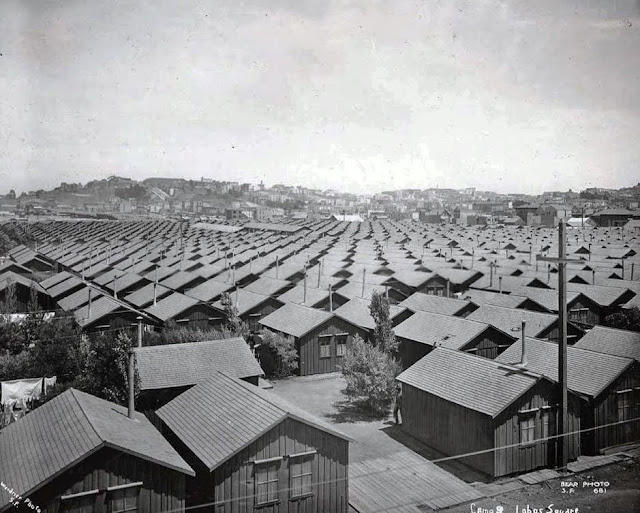 This is a picture of earthquake shacks located in the southwestern area of San Francisco. The photo was taken in 1907. Today this location is known as the Ocean View Playground. The playground is sited west of the Outer Mission District, between Lobos Street and Montana Street.

The destruction of large sections of San Francisco was due to the 18 April 1916 earthquake and subsequent fires. The earthquake and 52 separate uncontrolled fires burning for three days were catastrophic events that left more than 250,000 people without shelter and caused the deaths of approximately 3,500 people.

Municipal officials faced the prodigious task of rehousing the homeless. James D. Phelan was a US Senator from California when the earthquake occurred. He also served as Mayor of San Francisco from 1897 to 1902. During this emergency, he organized the San Francisco Relief Corporation, which implemented three programs used to help solve the urgent housing problem:

1. Provide a flat grant of 33% of construction costs for rebuilding, which was payable after the building was completed.

2. Provide public housing constructed on public land for expected long-term occupancy of those who could not afford "market rate" housing.

3. Ensured the construction of 5,610 earthquake refugee shacks that were to be positioned in public parks and squares throughout the city and leased to the homeless. Over 16,000 San Franciscans were in 11 refugee camps which were sited in locations that included Dolores Park, Washington Square, Precita Park, Portsmouth Square, and today's Park-Presidio Boulevard. The intention was to encourage the moving of the shacks to private lots. All rent paid by the occupants was refundable once the shed was relocated. 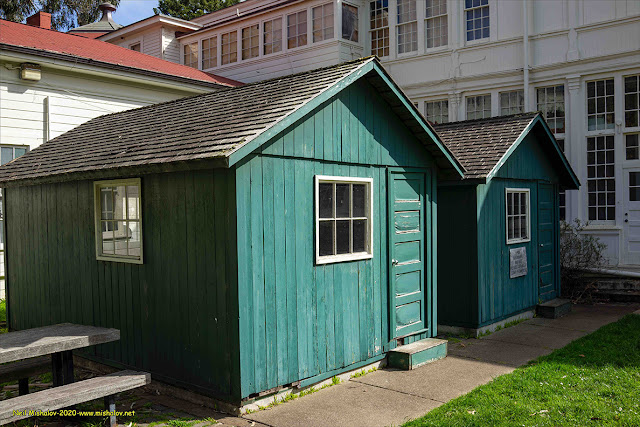 Here are two original earthquake refugee shacks on display at the Presidio. They are located behind the Old Post Hospital. 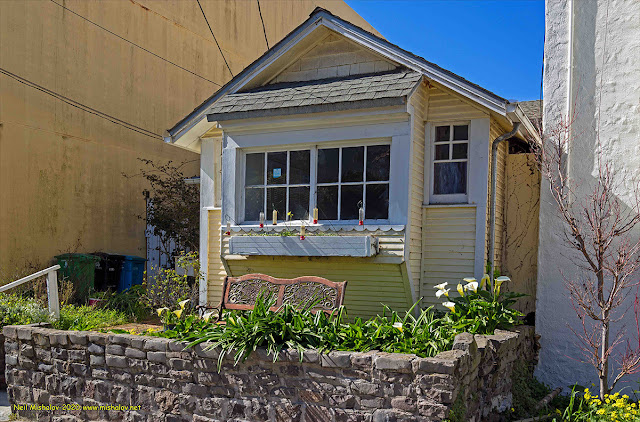 This is San Francisco Landmark #171. It is an Earthquake Refugee Shack that was built in 1906. It is now located in San Francisco's Sunset District at 1227 24th Avenue, one block south of Golden Gate Park. This building was constructed by the City Corps of Engineers, commanded by US Army General Adolphus Washington Greeley. The average size of an Earthquake Refugee Shack was 10 x 14 feet. This particular house is a combination of three separate refugee shacks, connected one behind one another. 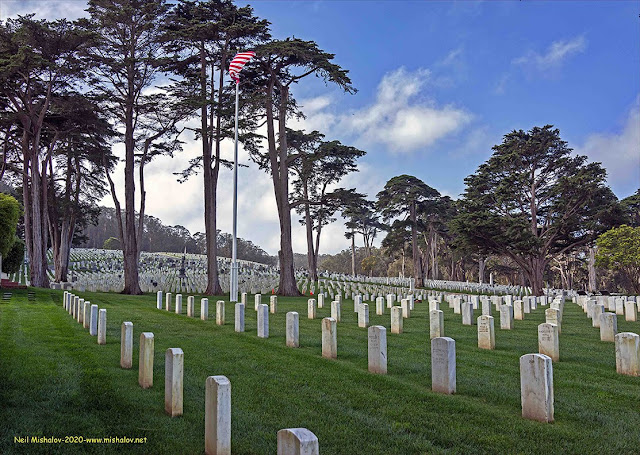 This is a view of the San Francisco National Cemetery. The cemetery is located within the Presidio military base. 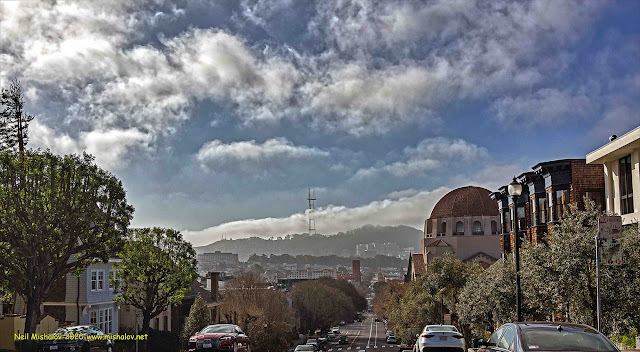 This view looks south from the Arguello Boulevard entrance to the Presidio. The dome seen on the right, and constructed in 1926, is part of Congregation Emanu-El, a Jewish synagogue that has been at this location since 1850. Visible in the distance are Mount Sutro, the University of California San Francisco Medical Center, and Sutro Tower.
-----------------------
"A camera is a tool for learning how to see without a camera.” Dorothea Lange