None of the attractions available to people visiting the San Francisco Bay Area is more unusual than San Francisco's neighbor to its south, the City of Colma. The city is located at the base of the western slope of San Bruno Mountain and is situated nine miles south of San Francisco. Colma is a necropolis, a city of the dead.

Within Colma's two square mile boundary are 16 cemeteries. Colma's dead far outnumber its living. According to the City of Colma, the town's current population is between 1,400 and 1,500 people, while the number of interred or cremated bodies in Colma is more than 1.5 million.

Colma was established as a part of San Francisco's urgent attempt to deal with what had been its most enduring social problem since the earliest days of the gold rush, human burial.

San Francisco is a compact city sited on forty-seven square miles at the tip of a peninsula. The land was more valuable than gold.

By the 1880s, San Francisco officials were enviously eyeing the land occupied by its many cemeteries. The four largest cemeteries in San Francisco were clustered on 60 square blocks in the Western Addition area at the base of Lone Mountain. City planners declared that the cemeteries had been put there in error and the land should be used for housing.

This gallery of photographs contains images of some of the eighty-seven private mausoleums that now occupy the original forty-seven-acre Cypress Lawn Cemetery site in Colma. Cypress Lawn Cemetery was one of the last grand garden cemeteries built in the West. Garden cemeteries were burial grounds that used landscaping in a park-like setting rather than merely places for graves.

The forty-seven-acre site became available for burials beginning in 1892. Many of San Francisco's wealthy entrepreneurs from the late 1800s and early 1900s purchased burial sites at Cypress Lawn Cemetery for themselves and their families. 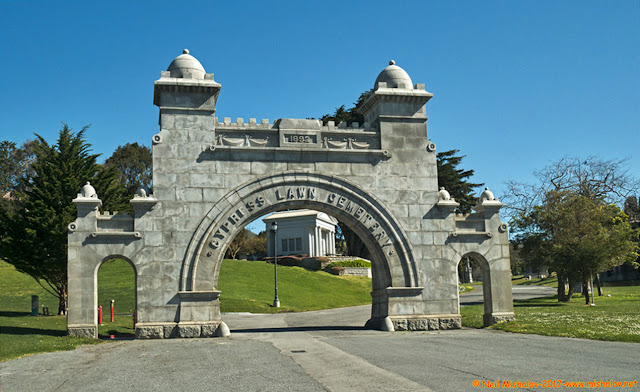 Are you interested in learning more about Colma and its cemeteries? If so, I recommend that you consider reading the following:

2. Pillars of the Past. A guide to Cypress Lawn Memorial Park, Colma, California