Much of San Francisco is built on one of three surfaces: steep hillsides, sand dunes, or former marshland. Of these surfaces, marshlands are probably the most treacherous. To erect structures on marshland, enormous amounts of fill: sand, dirt, and debris, must be brought to the location and dumped until a firm, dry surface is achieved. During the 1906 earthquake, buildings on “made ground" suffered the most damage because the ground was unstable and unsettled. This process, called soil liquefaction, takes place when loosely packed, waterlogged sediments at or near the surface lose strength and cohesiveness in response to strong ground shaking. Soil liquefaction occurring beneath buildings can cause significant structural damage during earthquakes.


By the early 1890s, an old creek and lagoon, in the area in which the Valencia Street Hotel was eventually constructed in 1896, was filled in with dirt, sand, and debris, and then built over. The severe jolts of the 18 April 1906 earthquake caused the soft-packed fill to settle quickly, leaving sinkholes in the street. The buildings on top of the earth fill rocked back and forth, with many buildings falling off of their foundations. The four-story Valencia Street Hotel, located between 18th Street and 19th Street, collapsed into a sinkhole. The top floor dropped to ground level and remained accessible; the bottom three floors collapsed into the sinkhole below the surface of the earth, crushing at least 25 people to death. An additional 20 or 25 individuals drowned due to flooding from a burst water main. There were still people alive under the rubble; rescuers tore apart the top of the building and saved about fifteen people, but more cries for help were heard. Rescue efforts continued for two days. On the third day, the area was engulfed in the firestorm, and those people still alive and trapped in the Valencia Street Hotel were incinerated. The exact death toll is unknown; it is estimated that between seventy-five and one hundred people died in the Valencia Street Hotel.


"A camera is a tool for learning how to see without a camera.” Dorothea Lang

The Mission District of San Francisco as seen during the coronavirus pandemic: July 2020 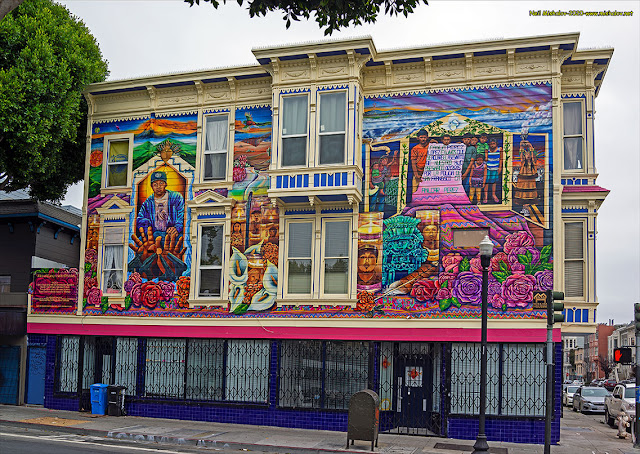