The majority of this ramble takes place in Wildcat Regional Park. We will pass Nike missile launching sites SF-08L & SF-09L as we walk north on Nimitz Way. This was the location of a large six-battery surface-to-air missile site; built during the Cold War. The SF-08L & SF-09L buildings were removed in the early1970s. The underground missile storage areas were covered with two or three feet of gravel and dirt, but the underground magazines are still there. The earthen berms separating the batteries from the liquid fueling area are still present. Very few people who pass this location have an inkling about what was once here… and what is still here, buried beneath the dirt and gravel.
We will also view the Nike Radar Acquisition Site  SF-09C and the former location of Grande Vista Sanitarium, also known as the Belgum Sanitarium. 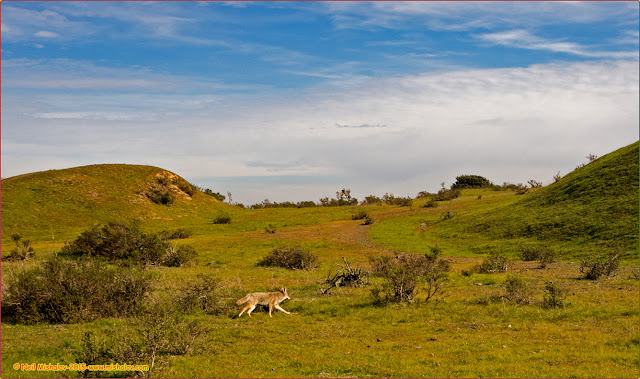 NOW
This coyote is roaming through the former location of Nike missile launching sites SF-08L & SF-09L. The view is looking east.

---------------------
"A camera is a tool for learning how to see without a camera.” Dorothea Lange
"Photography has not changed since its origin except in its technical aspects, which for me are not important." Henri Carter-Bresson
"There are always two people in every picture: the photographer and the viewer." Ansel Adams
"The important thing is not the camera but the eye." Alfred Eisenstaedt
The first volume of the San Francisco Bay Area Photo Blog contains galleries of photographs posted on the Internet between 2002 and 2011. Click Here to view those photos.
Question or comment? I may be reached at neil@mishalov.com.
Posted by Neil Mishalov