A trip from Berkeley to San Rafael, via a new Golden Gate Transit bus route: 15 December 2015

I read an interesting news article recently.
A summary: Starting immediately, Golden Gate Transit, the Marin County Public Transit entity, is inaugurating Bus Route 580, a new nine-month commuter bus service between Berkeley and San Rafael.
I took the 8:13 am bus to San Rafael from Berkeley this past Tuesday. Bus Route 580 is only active during commuter hours, and I decided to find a different way to get back to Berkeley.
My plan was to return to Berkeley by walking from San Rafael to the Larkspur Ferry Terminal and then take a ferry from the Larkspur Ferry Terminal to the Ferry Building in San Francisco. After which, it is a short walk to the Embarcadero BART station. I will then disembark at the North Berkeley BART Station and walk home.
Here are some downsides to this fabulous bus route: 1. Bus Route 580 has been funded for only nine months, after which there will be an evaluation to determine if it is feasible to continue the service. 2. Bus Route 580 is only active on weekdays during commute hours. 3. There is no weekend service.

UPDATE: The bus route has been canceled due to a lack of sufficient riders to make the route financially viable. Too bad.
Click on an image to view the full-size photograph. 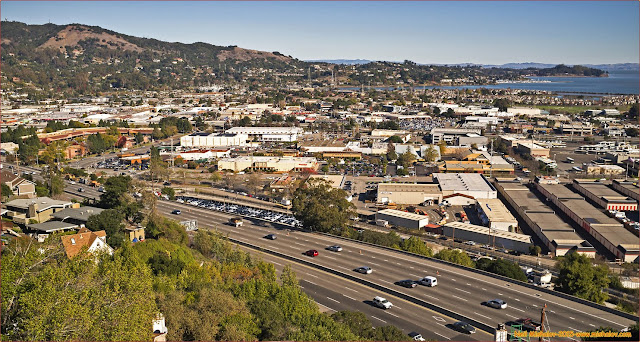 US 101 is visible in the lower portion of this photograph. San Pedro Mountain is on the upper left, with China Camp State Park jutting out into San Francisco Bay. The view is looking northeast.
"A camera is a tool for learning how to see without a camera." Dorothea Lange
"Photography has not changed since its origin except in its technical aspects, which for me are not important." Henri Carter-Bresson
"There are always two people in every picture: the photographer and the viewer." Ansel Adams
"The important thing is not the camera but the eye." Alfred Eisenstaedt
The first volume of the San Francisco Bay Area Photo Blog contains galleries of photographs posted on the Internet between 2002 and 2011. Click Here to view those photos.
Question or comment? I may be reached at neil@mishalov.com.
Posted by Neil Mishalov