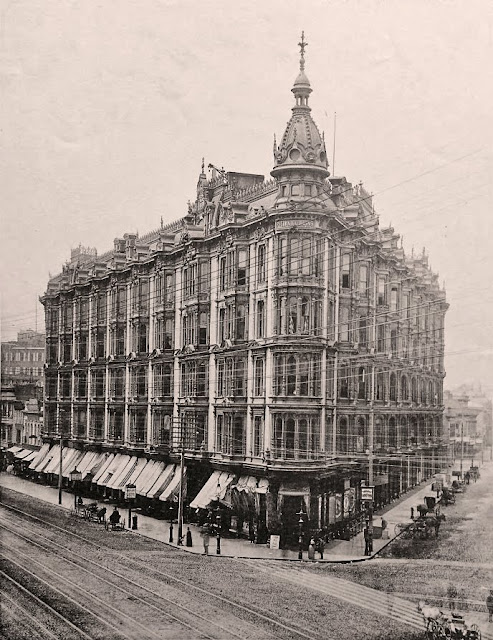 THEN: This five-story office building was built in 1888. It was located on Market Street in downtown San Francisco; the cross street was O'Farrell Street. The building was constructed by James D. Phelan. 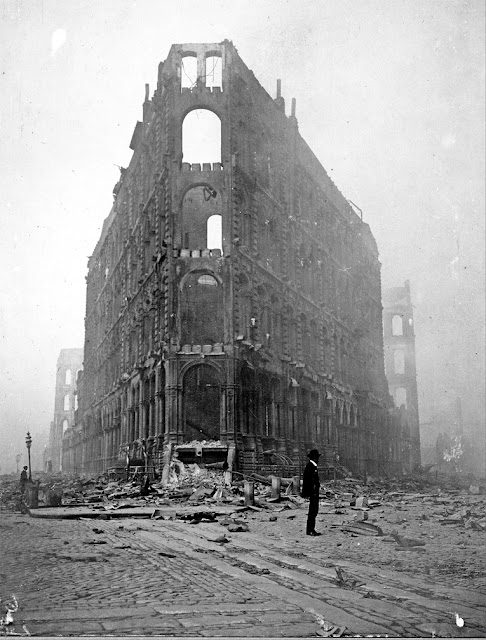 THEN: The Phelan Building was destroyed by the earthquake and subsequent fires of 18 April 1906. This photo was taken two days after the earthquake. 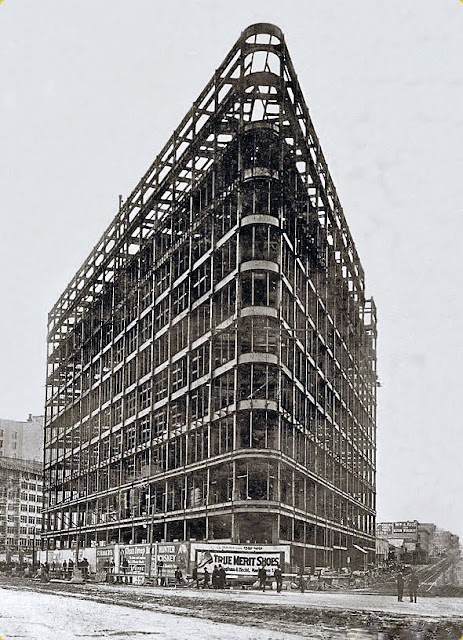 THEN: This is the replacement Phelan Building, it was constructed on the same site as the original Phelan Building. This photo was taken in 1908. The building's architect was William Curlett. 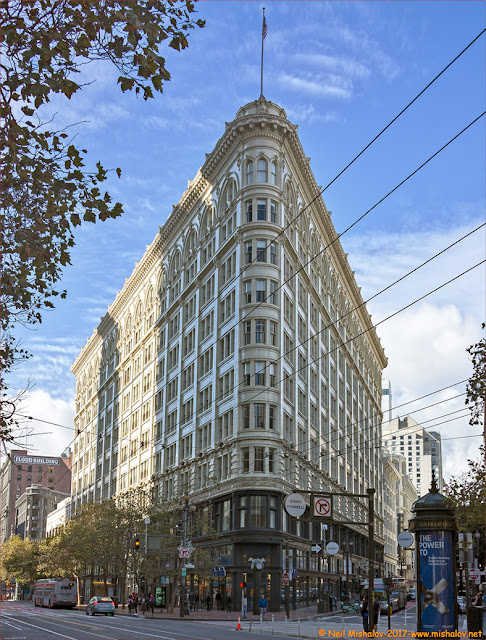 NOW: Here is a view of the Phelan Building one hundred and nine years after its construction. It is an 11-story office building located at 760 Market Street. 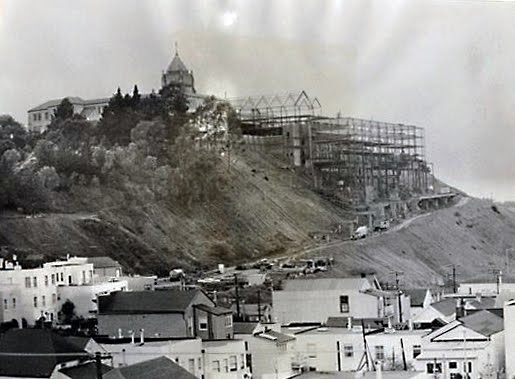 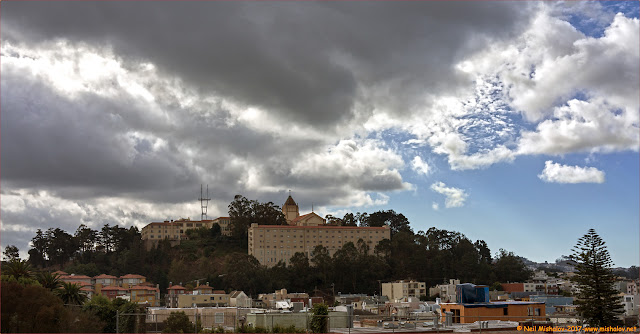 NOW: The school is now a part of the University of San Francisco. This view is looking south. 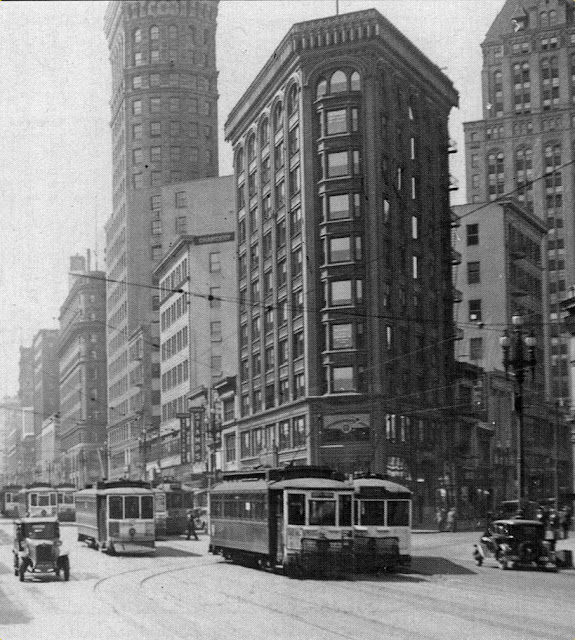 THEN: This building is known as San Francisco's Flatiron Building. It is located at 540 Market Street at Sutter Street. The structure was built in 1913. The photograph is circa the 1930s. 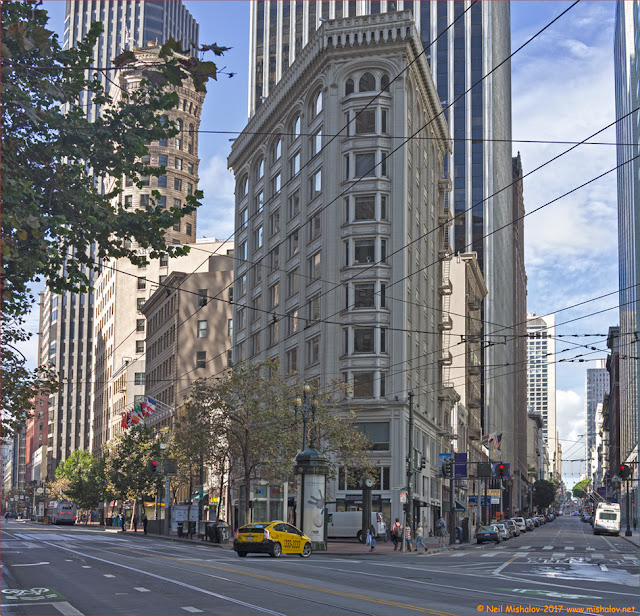 NOW: The Flatiron Building is a ten-story building, and it is San Francisco Landmark #155. 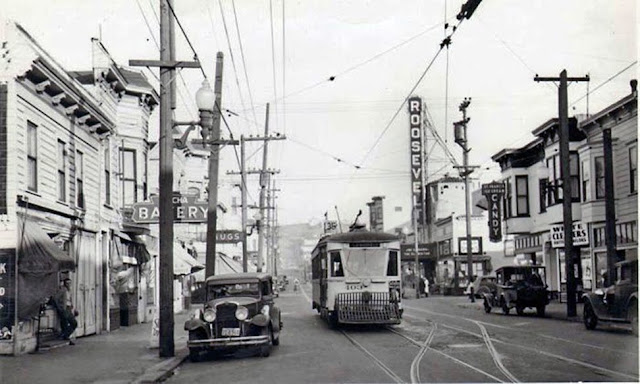 THEN: This photo was taken from 24th Street near York Street in the Mission District. The year is 1938, and the view is looking east. A 35-Howard line streetcar is rolling west on Twenty-fourth Street. In the distance is Potrero Hill, and on the right is the Roosevelt Theatre. The theatre opened on 22 September 1926. Most of the buildings visible in this eighty-year-old photo are still standing today. Photo courtesy of San Francisco Remembered. 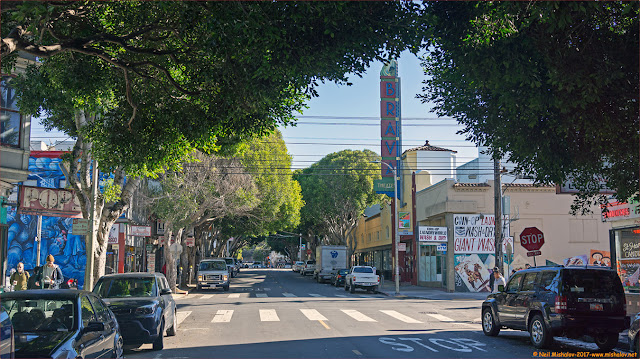 NOW: Streetcars are no longer rolling up and down Twenty-fourth Street. The Roosevelt Theatre was renamed the York Theatre in the 1950s. The York Theatre closed in the 1993.  It reopened in December 2000, and is now known as the Brava Woman's Theater Arts, a venue that is primarily a performing arts center. 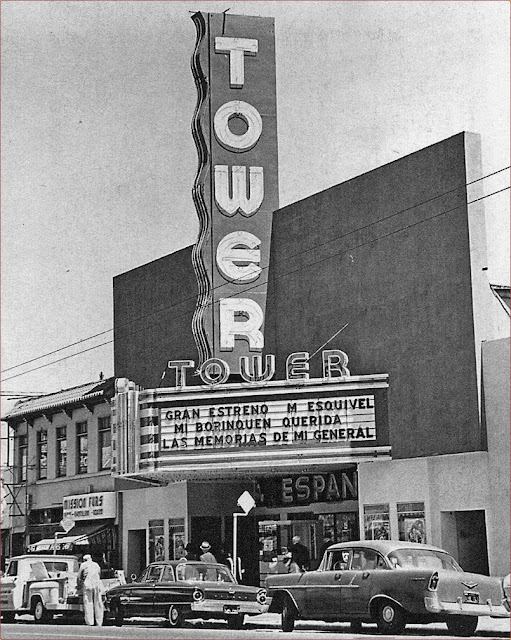 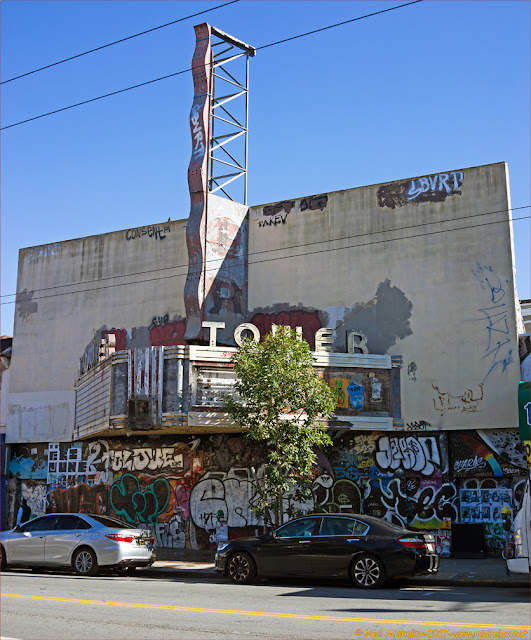 NOW: The church moved out of the building in 2006. This is a current view of the Tower Theatre building. Yes, there is still hope for the building's survival. 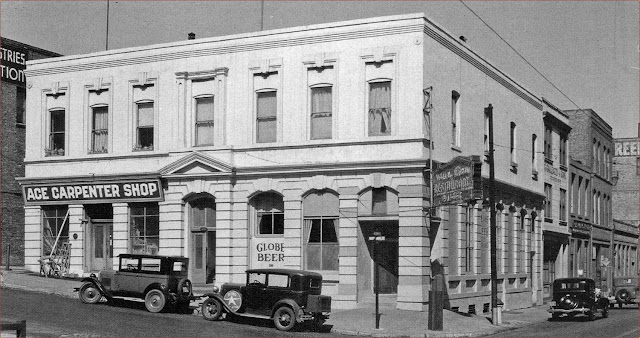 THEN:  William Tecumseh Sherman, a future American Civil War general who served in the Union Army, supervised the construction of this building between 1853-1854. The Bank of Lucas, Turner and Company became the first occupants of the building in 1854. The structure's facade faces Montgomery Street, the main San Francisco business street at the time. The 1906 Earthquake damaged the third floor of the building, and the third floor was removed. The building is San Francisco Landmark #26, and California Historical Landmark #453. This photo is circa 1934. 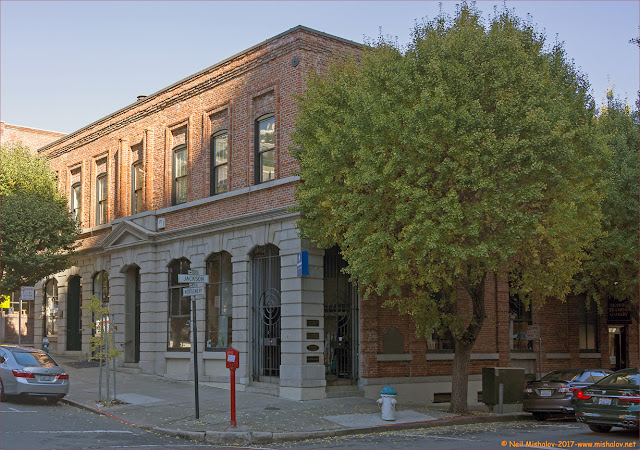 NOW: The building is located at 800 Montgomery Street. It has housed restaurants, a bank, a sausage factory, a soy sauce factory, apartments, a carpenter shop, and numerous other tenants during the last one hundred and sixty-three years. 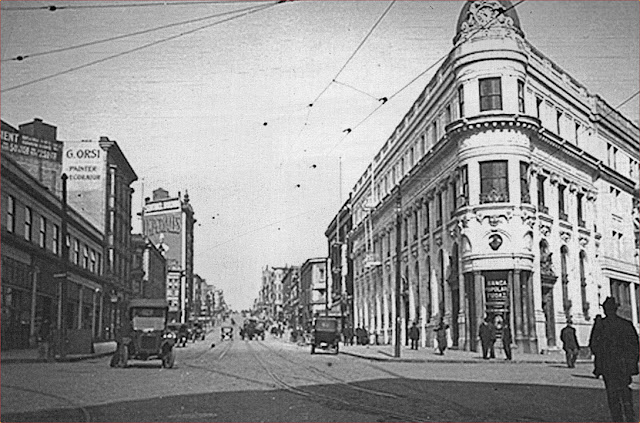 THEN: This building is located at 701 Montogomery Street at Columbus Avenue. It was built in 1909 for the Fugazi Bank. The bank was eventually acquired by the Bank of Italy, and in 1938 the building became the headquarters of the Transamerica Corporation. The building is San Francisco Landmark #52. The photo is circa the 1920s. 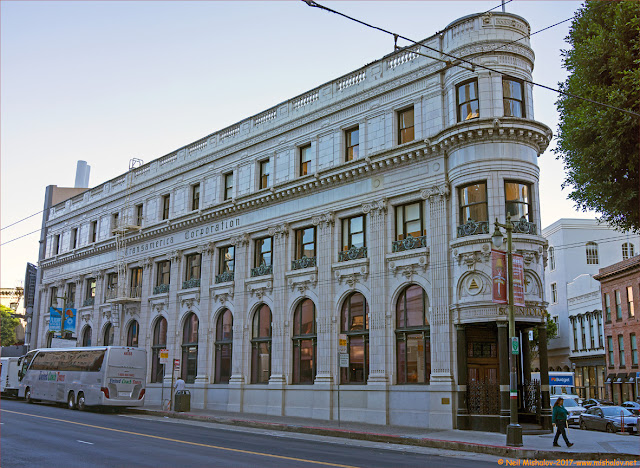 NOW: The building is presently occupied by the Church of Scientology. 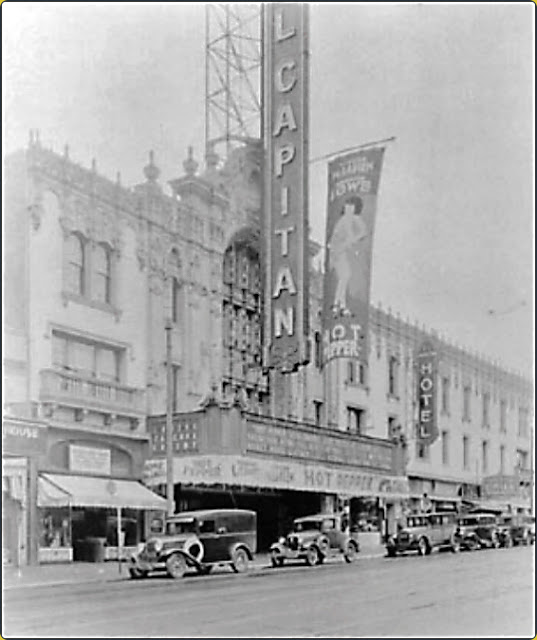 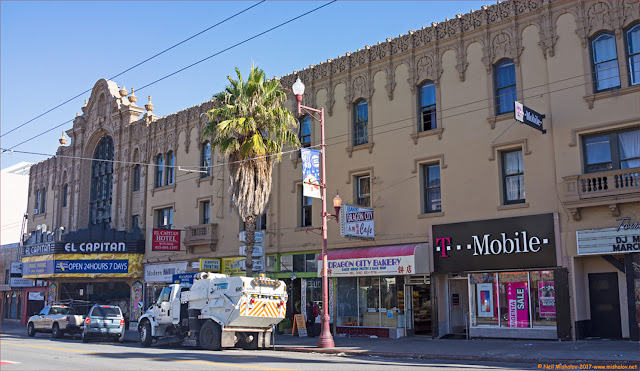 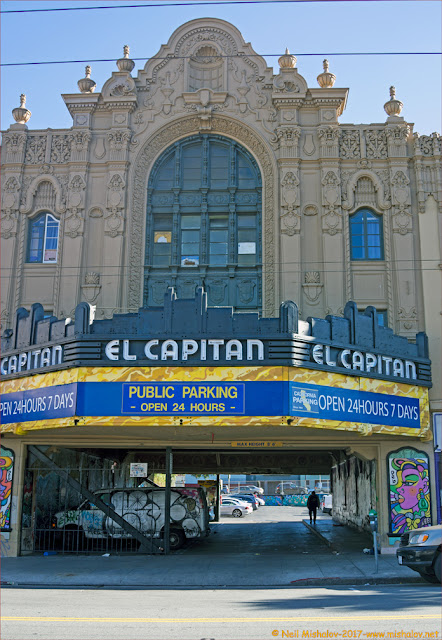 NOW: This scene shows a view of the parking lot which now occupies the site of the theatre's auditorium. 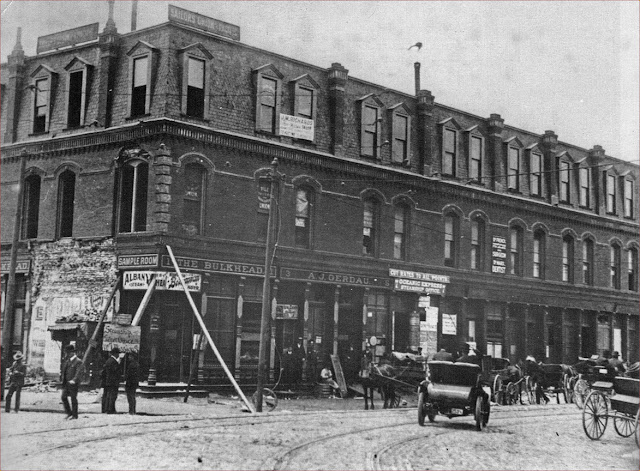 THEN: This commercial waterfront building was constructed in 1889 by Hippolyte d'Audiffred. The building is located at 1 Mission Street; it is near the Ferry Building, and the cross street is the Embarcadero. It is fortuitous that the building survived the 18 April 1906 fires. This photo is circa 1906. 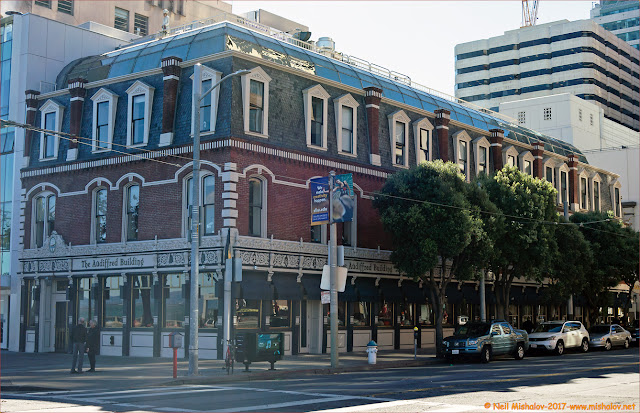 NOW: The structure is now known as the Audiffred Building. It is San Francisco Landmark #7 and is National Register #79000528. 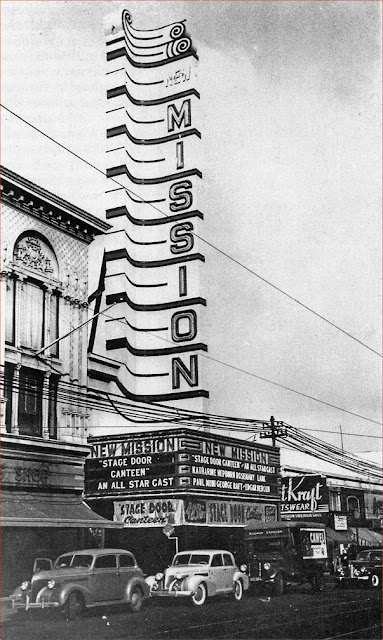 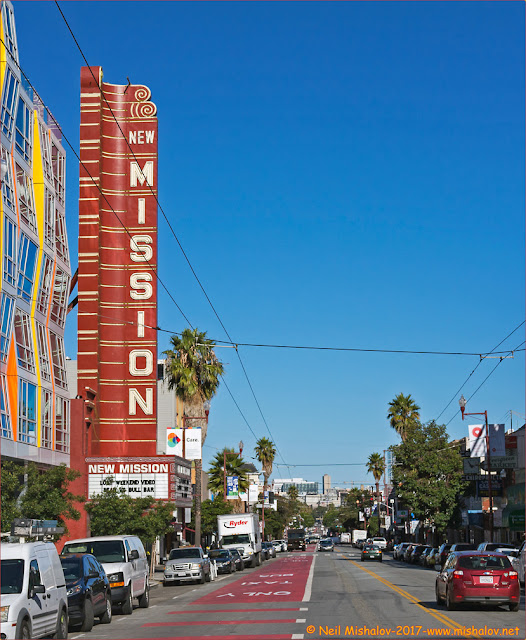 NOW: The New Mission Theatre closed in 1993, and it became the location of a furniture store. The theatre building was eventually purchased by City College of San Francisco, which proposed to demolish the building and construct a new college campus on the site of the theatre. There was a strong lobbying effort to save the theatre. The endeavors taken to keep the theatre were successful, and the theatre reopened in December 2015. The building is San Francisco Landmark # 245.

GO HERE to view part one of San Francisco then & now.

Catherine Accardi is the author of San Francisco Landmarks. Her book was helpful in assembling this gallery of ‘Then and Now’ photographs.

Jack Tillmany is the author of Theatres of San Francisco. His book was helpful in assembling this gallery of ‘Then and Now’ photographs.

Market Street Railway was helpful in assembling this gallery of ‘Then and Now’ photographs.

A Sony camera was used to take the present-day photographs.