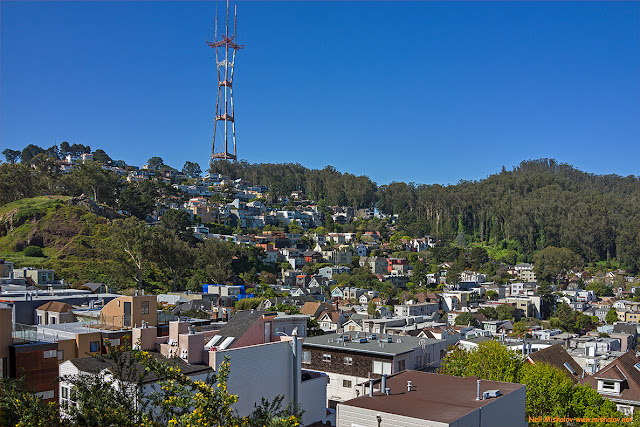 This is a view from Mount Olympus looking west. Tank Hill is the treeless hill visible on the left, and Mount Sutro is the treed hill on the right. 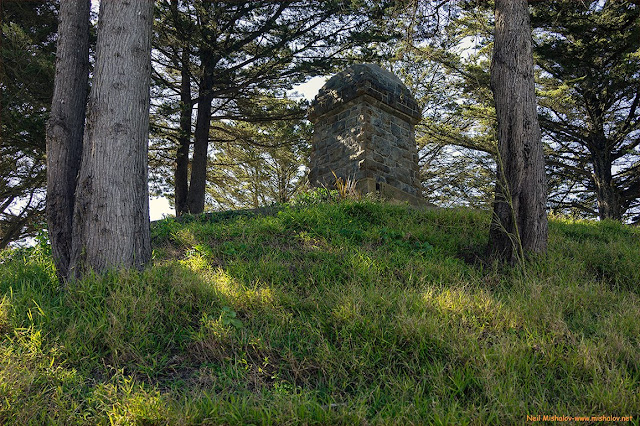 Here is a view of the north side of the summit of Mount Olympus.
. 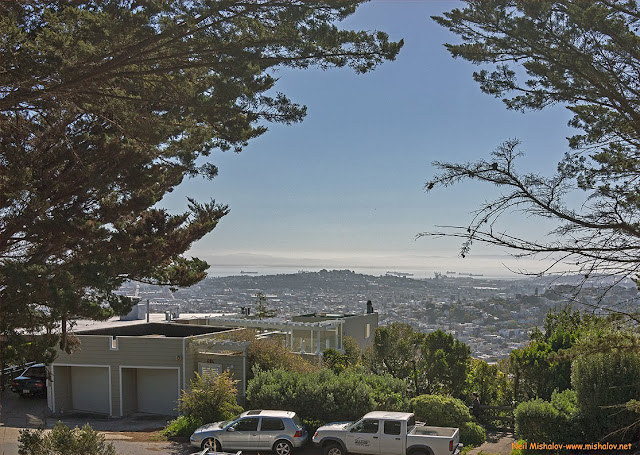 This view is looking southeast from the summit of Mount Olympus. 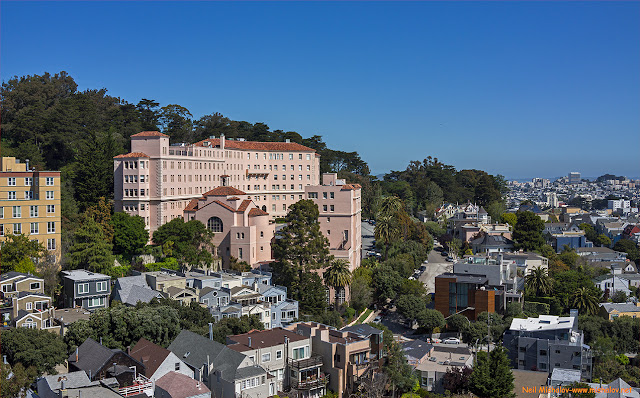 This is a view from Corona Heights Park. The treed area on the left is Buena Vista Park. The pale pink building ahead is the second iteration of St. Joseph's Hospital. The hospital was founded by the Catholic Church at this location in 1899. This building opened in 1928. It accepted patients regardless of religion or nationality and was known as the working man's hospital. The hospital permanently closed in 1979 due to a decrease in the number of patients, and the concern about the vulnerability of the building in case of a massive earthquake. The building has since been structurally strengthened, and it is now a residential condominium community known as Park Hills Condominiums. This view is looking north. 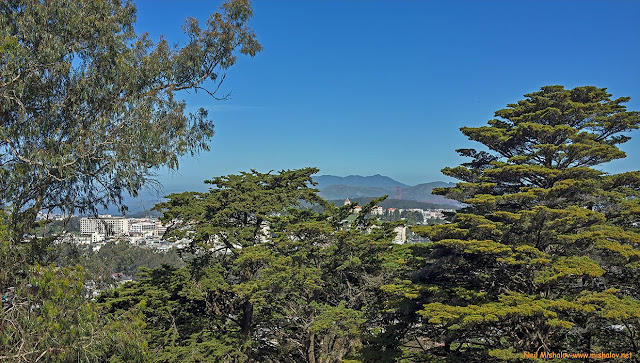 Here is a view looking north from the summit of Buena Vista Park. The Marin Headlands and Mount Tamalpais are visible in the distance. 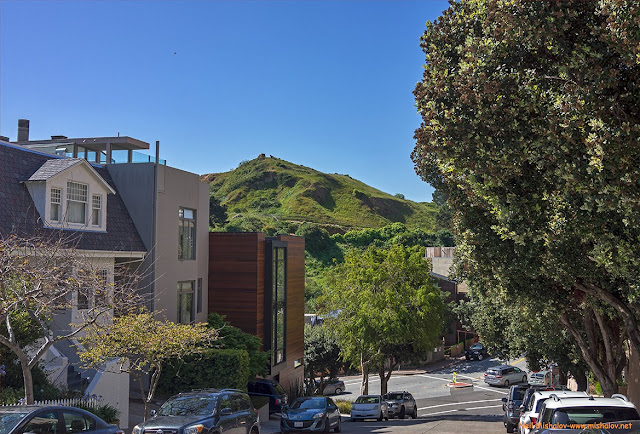 This is a view of Corona Heights Park as seen from Park Hills Avenue. The picture is looking south. 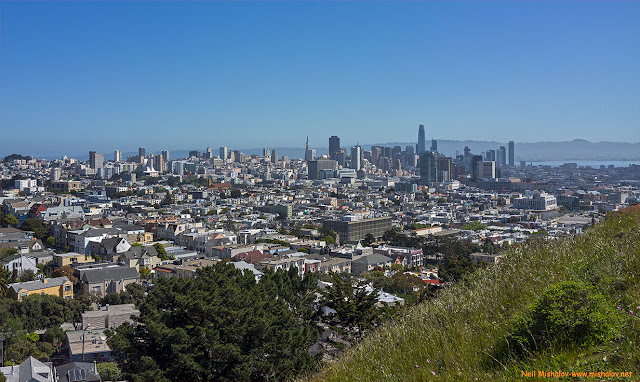 A scene from near the summit of Corona Heights Park. The view is looking northeast. 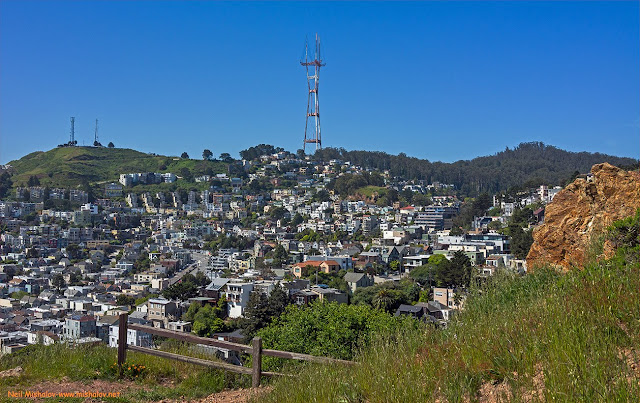 This is a view looking west from Corona Heights Park. A portion of Twin Peaks is visible on the left, and Mount Sutro can be seen on the right. 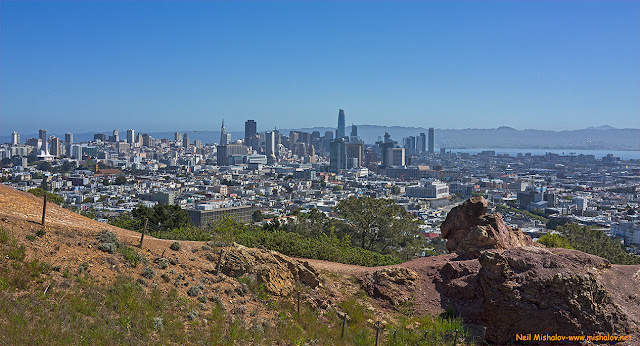 This is another view from near the summit of Corona Heights Park. This view is looking east. 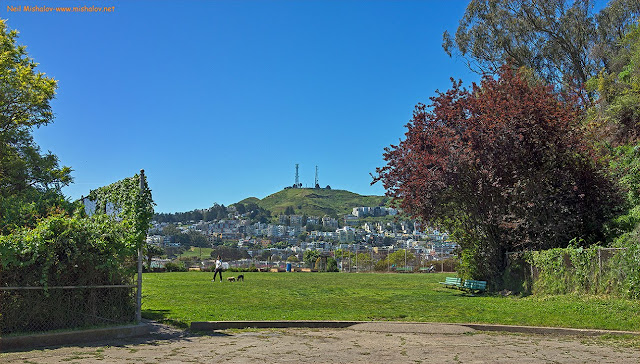 This was the site of a brickmaking factory when Corona Heights Park was known as Rocky Hill. The factory was established in 1899. The factory buildings were destroyed during the 1906 earthquake; the factory was promptly rebuilt. 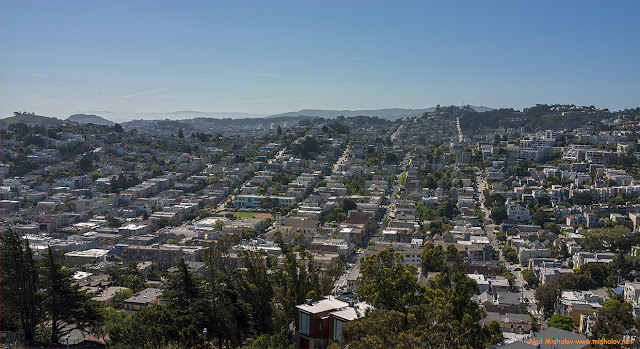 This is a view from Corona Heights Park looking south.

This picture of Corona Heights Park was photographed from the intersection of Eureka Street and 19th Street; the view is looking north. 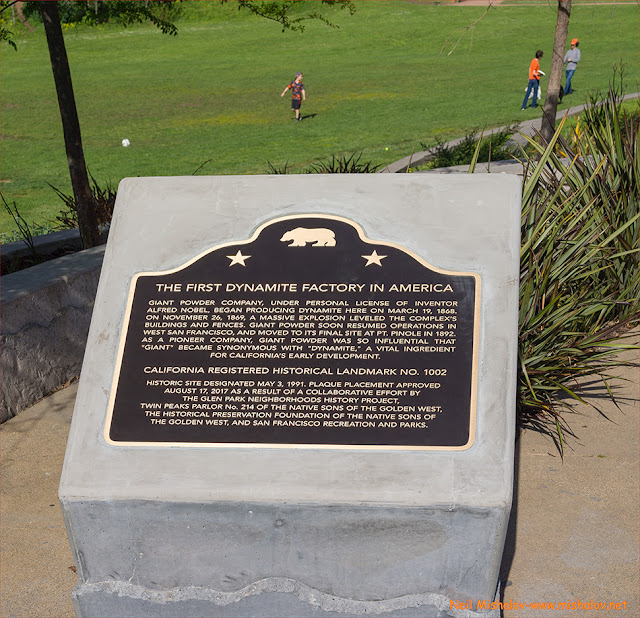 In 1848 gold was discovered in the Sierra Nevada mountain range of California. People quickly traveled to California with expectations of finding gold. Men initially used picks and axes to remove gold from the land. In 1867 Alfred Nobel invented the blasting explosive known as dynamite, which became the widely used method to separate gold from the earth.
On 19 March 1868, Alfred Nobel personally licensed the Giant Powder Company of San Francisco to produce and distribute dynamite to the companies and individuals who were searching for gold in the Sierra Nevada mountains. The gold diggings were approximately 150 miles east of San Francisco. The Giant Powder Company built the first dynamite factory in San Francisco's Glen Canyon. Less than two years after Giant Powder Company began production of dynamite, a massive explosion destroyed the factory and killed two men and injured nine people working in the factory.
The Giant Powder Company manufacturing facility was moved to Fleming Point near Berkeley in 1879. In January 1883  there was a massive explosion at the Fleming Point factory. 37 Chinese workers, in addition to the assistant superintendent, were killed in the explosions.
This is how the New York Times reported the 1883 explosions:
"There was a terrific explosion this morning at the works of the Giant Powder Company in West Berkeley across the bay from San Francisco. Seven distinct shocks were felt, and 300 tons of giant powder brought death and destruction to the immediate neighborhood and caused great damage to Oakland and San Francisco. People for some moments, in both cities, were panic-stricken."
The factory buildings were rebuilt, and production continued at Fleming Point for approximately a decade before yet another explosion occurred at the Fleming Point site on 9 July 1892. The general foreman later claimed that the explosion involved more than one million pounds of explosives. This is how the New York Times reported the 9 July 1892 explosion:
"Immediately after the explosion, the town of West Berkeley from a distance resembled the site of an actual volcano. Dozens of private houses in the vicinity were partially destroyed and all along the road from Oakland to West Berkeley Station were damaged buildings."
Five men were killed, and more than a dozen people were injured. The Giant Powder Company Fleming Point manufacturing facility was then closed. The manufacturing operation was then moved to Point Pinole, an isolated area located north of Berkeley. Numerous explosions also occurred at the Point Pinole manufactoring site. In 1960 the Giant Powder Company ceased manufacturing dynamite. 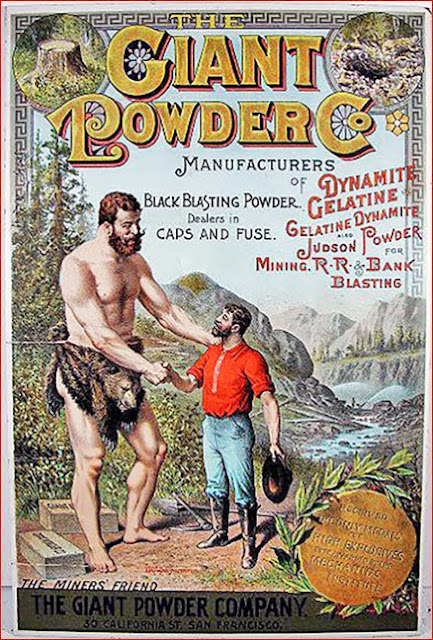 This is a late 19th Century advertisement from the Giant Powder Company. 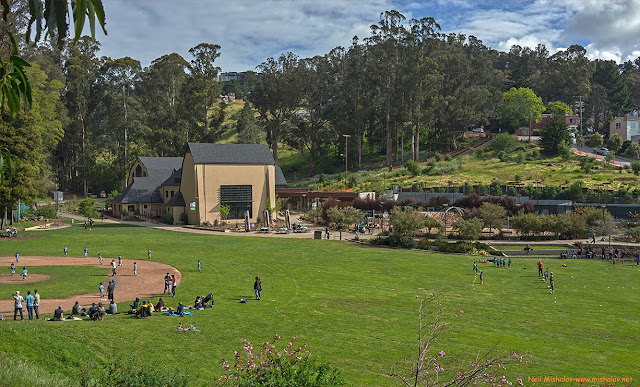 This was the site of the original Giant Powder Company dynamite manufacturing factory. It is now a playground located in the lower area of Glen Canyon Park. The recreation center building seen in the photo was constructed by the Works Progress Administration in 1937.

This is a view from Glen Canyon Park looking north. 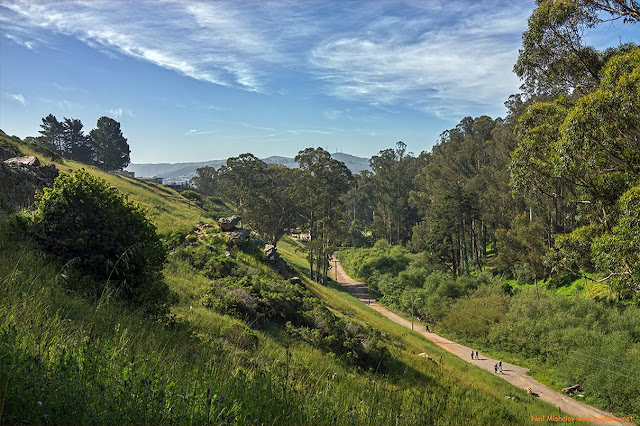 Here is a view looking south. 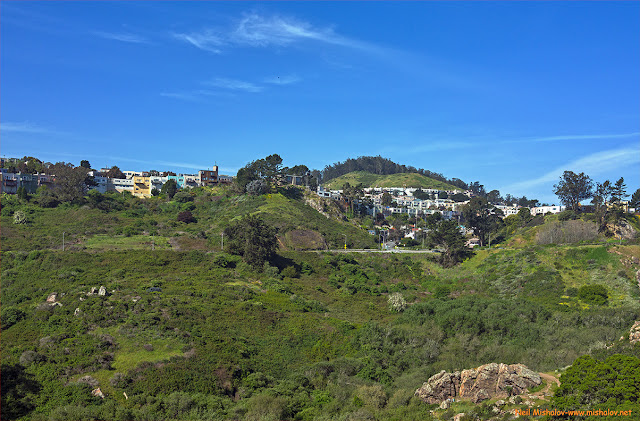 This is a view from Glen Canyon Park looking west. Ahead is Mount Davidson, 928 feet (283 meters), the highest natural point in San Francisco. 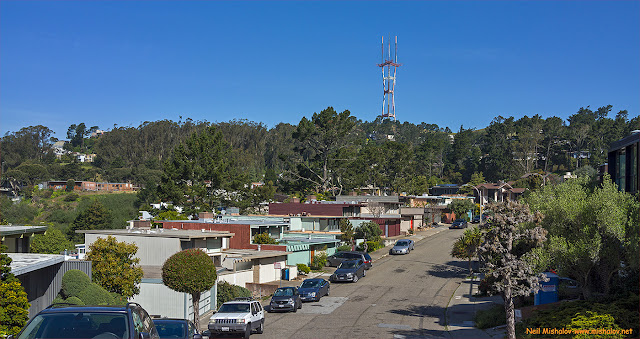 This is a view looking north from the top of Glen Canyon Park. Sutro Tower is seen ahead. 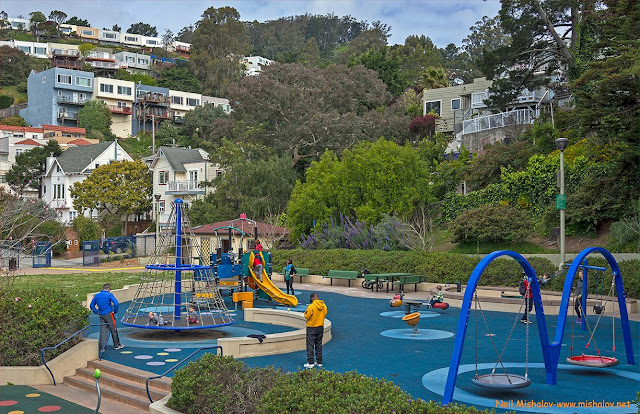 This is a scene from a playground located in the Sunnyside neighborhood of San Francisco. 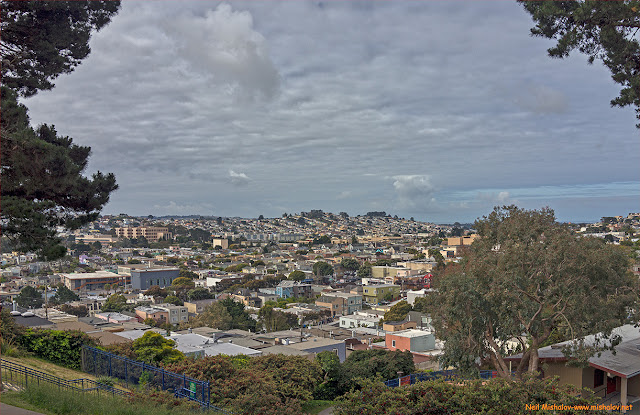 Here is a view looking southwest from the Sunnyside neighborhood of San Francisco. 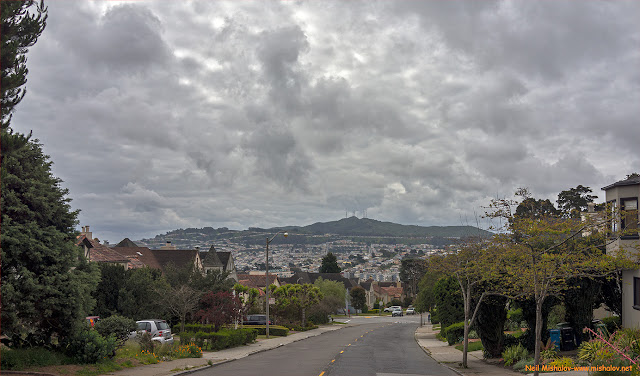 This is a view of San Bruno Mountain. The picture is looking south, and it was taken from Yerba Buena Avenue. 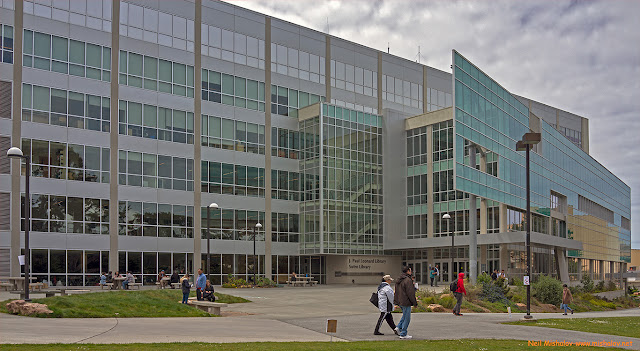 This photo was taken on the grounds of San Francisco State University. This library building is the current home of the Adolph Sutro library. 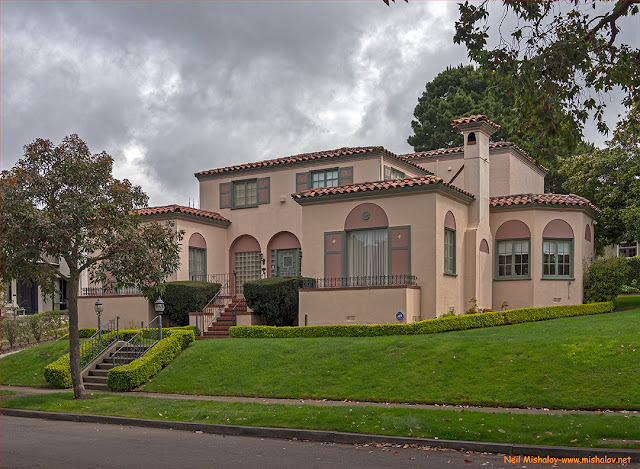 The next three photographs are of houses located in the St Francis Wood neighborhood of San Francisco. 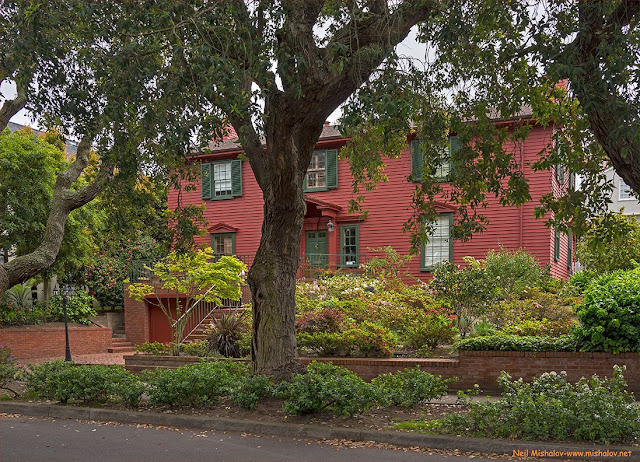 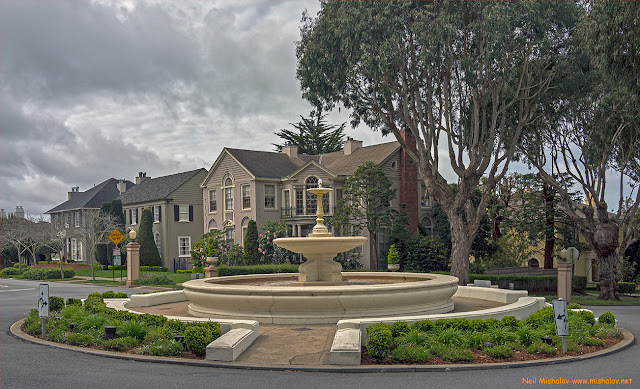 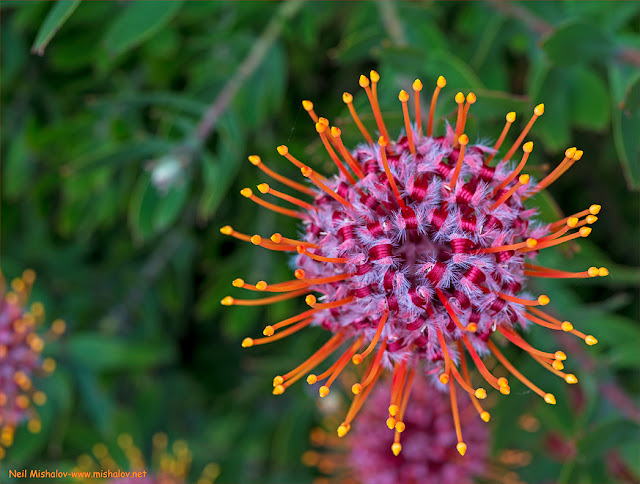 This is a flowering Leucospermum Pincushion plant; it is native to southern Africa.