A hike from Olompali State Historic Park to the summit of Mount Burdell: 7 October 2020 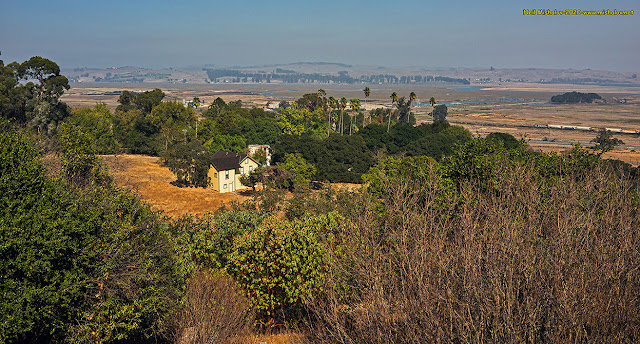 This is a view of Rancho Olompali.

From 1866 to 1943, Rancho Olompali was the home to three generations of the Burdell family. The ranch was sold in 1943. In 1948, the buyer defaulted on the property loan. The property was then resold by the family, and acquired by the University of San Francisco, a Jesuit university. The University sold the property in early 1966 to a San Francisco investment group.
During the spring of 1966, the Grateful Dead rented the main buildings for six weeks: Rock music icons, such as Janis Joplin and Grace Slick, were frequent visitors. The rock stars joined the Grateful Dead on a makeshift outdoor stage.
The Grateful Dead and Rancho Olompali
In 1967 the main ranch buildings were leased to a businessman turned hippie for use as a commune. By the beginning of 1969, when the flower-power era gave way to the darker realities resulting from drug use, things were getting out of control on the property. The barns and adjacent buildings were then leased to a horse-riding stable until 1981.
Public outcry defeated an attempt to purchase Rancho Olompali for a proposed condominium and mobile home development. Preservation efforts resulted in Rancho Olompali becoming Olompali California State Historic Park in 1977.
The park is a hilly 700-acre parcel of land situated in Marin County, and it is located 3.5 miles north of downtown Novato. The park overlooks the Petaluma River and San Pablo Bay. The Burdell two-story frame house built in the 1870s now serves as a ranger station. Associated ranch buildings include barns, a blacksmith shop, a saltbox house, and a ranch superintendent's house.
The park is the site of the oldest surviving house located north of San Francisco Bay. The house was built in 1776 of adobe bricks, and it is California Historical Landmark #210.
The name "Olompali" comes from the Coast Miwok language and likely means "southern village" or "southern people." 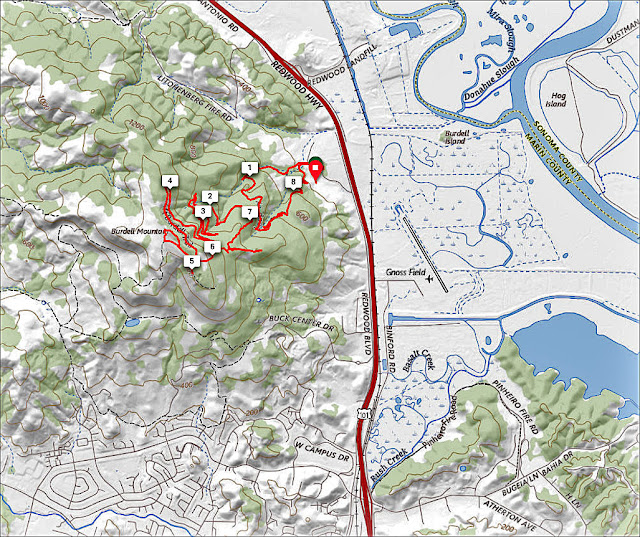 Olompali State Historic Park is nestled on the east-facing slope of Burdell Mountain, and it is contiguous with the northern perimeter of the city of Novato. The 8.9-mile, GPS-tracked hiking route is shown on this map. 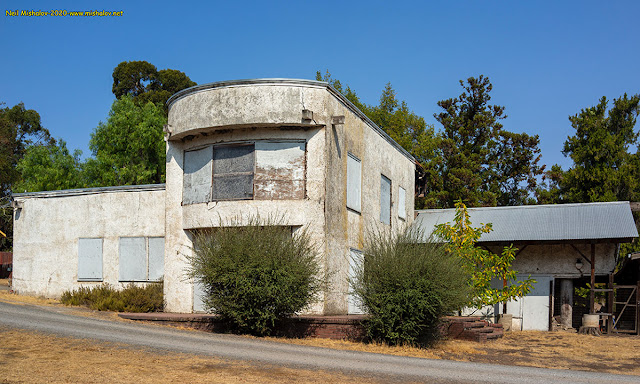 A significant stylistic change occurred in 1911 when James Burdell, the son of Galen and Mary Burdell, hired a contractor to expand and convert the original wood-frame house into a 26-room stucco mansion. An electric fire severely damaged the building on 2 February 1969. The fire exposed the remains of the original adobe walls. This picture of the Burdell Mansion was taken on 7 October 2020. 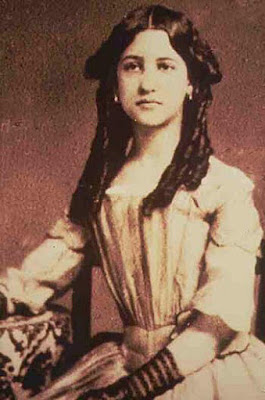 Mary Black Burdell (1845-1900)
In 1852, the Olompali land grant was sold to James Black, the Marin County Assessor. In 1863, James Black gave his daughter Mary the property when she married Galen Burdell (1828-1906), a prominent San Francisco dentist. By 1866, Dr. Burdell and his wife Mary left San Francisco and made their permanent home on the land they called Rancho Olompali. 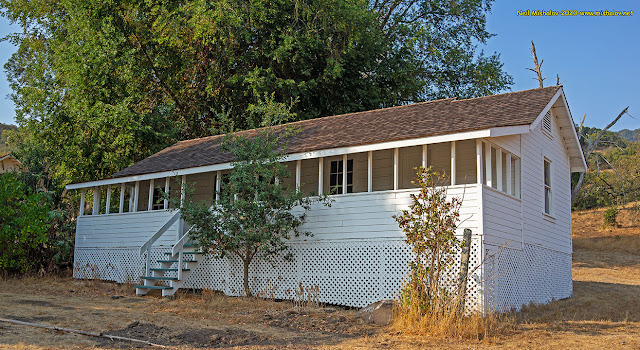 Galen Burdell had this house built as a home for his ranch superintendent.
The Ranch House and Salt Box House are all that remain today of several buildings that once housed many ranch employees doing daily ranch chores such as raising horses, cattle, sheep, and chickens and tending to gardens, orchards, and vegetable crops. 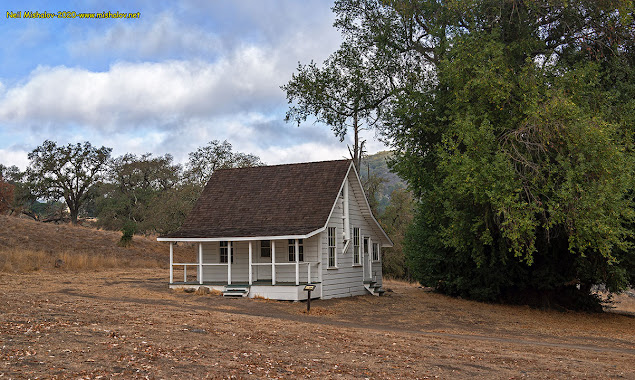 This saltbox house is typical of small houses built throughout northern California in the 1850s and 1860s. This house was probably used as the blacksmith's residence. The house is built on wooden sills and random, hand-laid stones. The walls lack studs, as used in modern home construction. Instead, two layers of one-inch thick boards are nailed to the top and bottom of each wall.
The front porch, with its more gently sloped roof, and the open porch towards the rear, are not part of the original structure. This is most likely one of the earliest buildings constructed on the Burdell ranch complex. 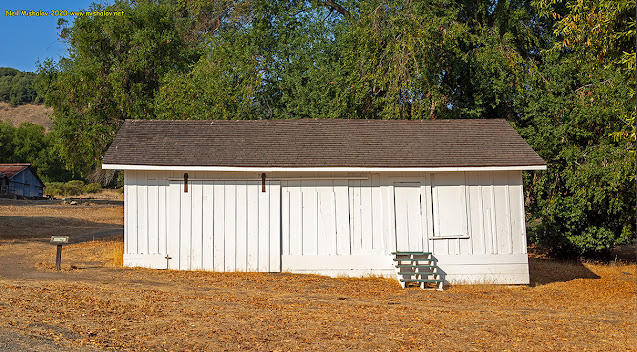 This building was built as the blacksmith shop circa 1870. It remained in continuous use for close to 100 years. In the days before mass production, such essential ranch items as horseshoes, hinges, iron gates, and branding irons were manufactured here by the blacksmith. 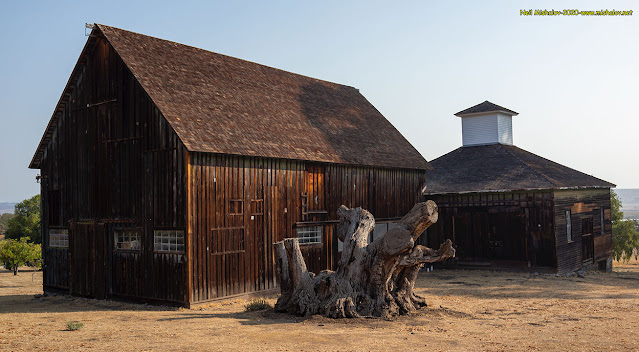 These are the two Burdell Barns. The barn with the white cupola was the original barn, circa 1866. It is an excellent example of early 19th-century rural architecture. The "newer" rectangular barn was added around 1882. 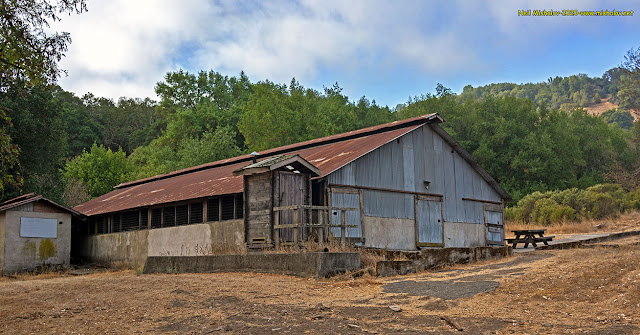 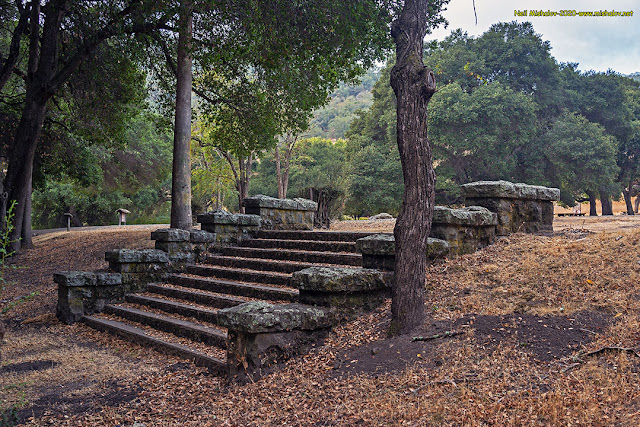 This is the stairway to the Formal Victorian Garden, which was created circa 1867. 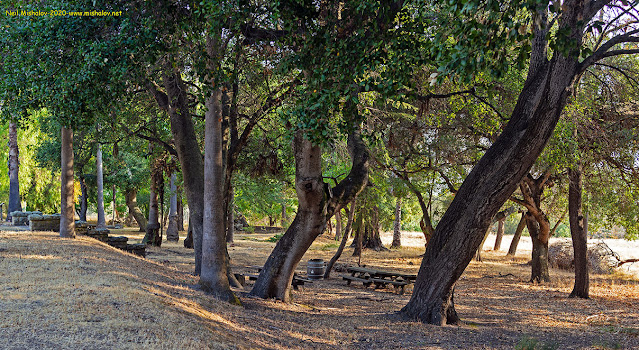 The Formal Victorian Garden site is now full of wild trees. This is a rare and intact Victorian garden. Mary Burdell designed this garden site. 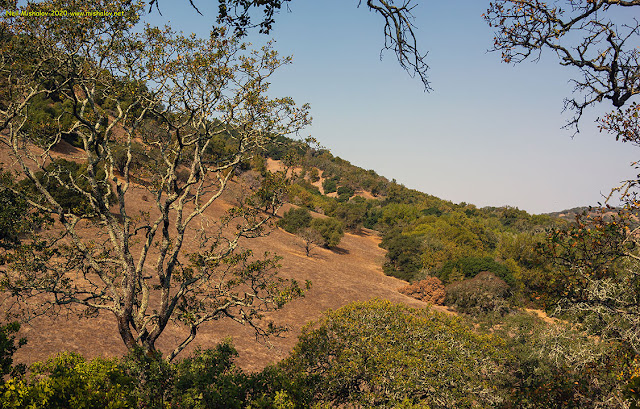 A view from the Burdell Trail while hiking to the summit of Mount Burdell. 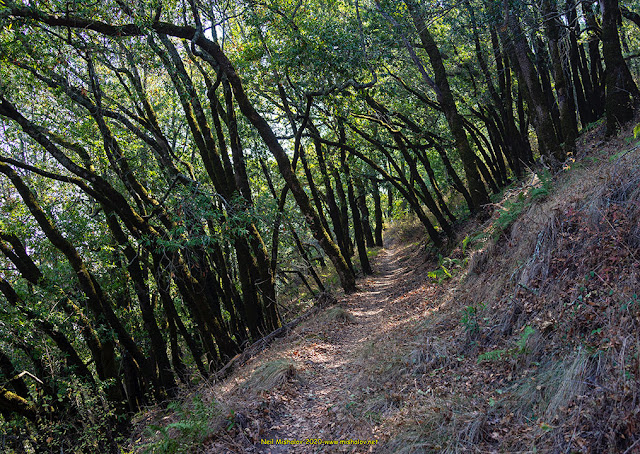 On the Miwok Trail.

Here is a view looking east, from near the top of the Burdell Trail. As seen ahead, the Petaluma River is gracefully wending its way down to San Francisco Bay, located approximately four miles downstream. 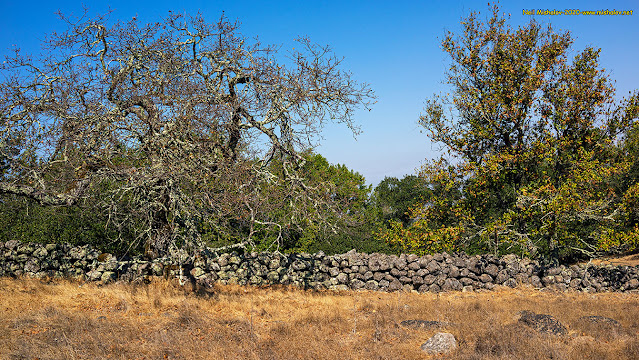 The 1880 California Census Report recorded forty Chinese laborers living at Rancho Olompali. Those workers were credited with building four-foot-tall rock walls, the stone foundation for the first barn, and the rock-lined reservoir. Here is one of the rock walls, as seen on the northwest boundary of the property.

This view is looking west from the summit of Mount Burdell (1,558 ft.) 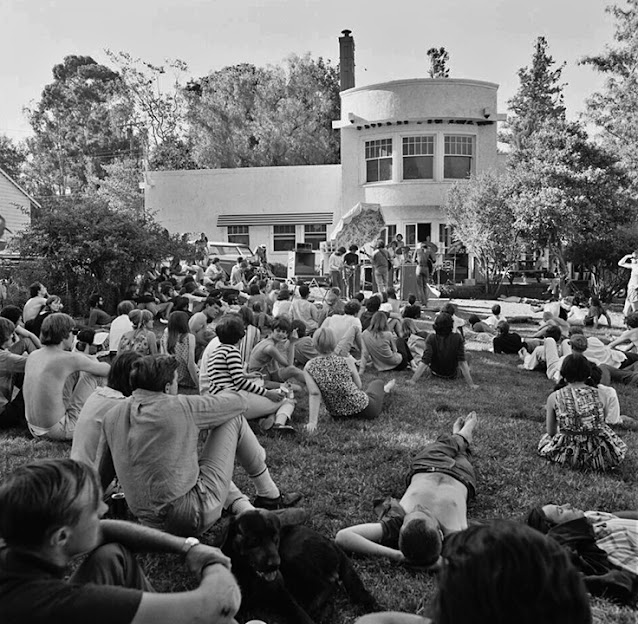 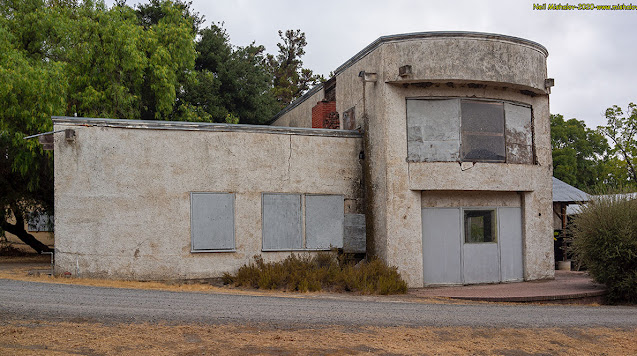 The Burdell Mansion as seen in October 2020. 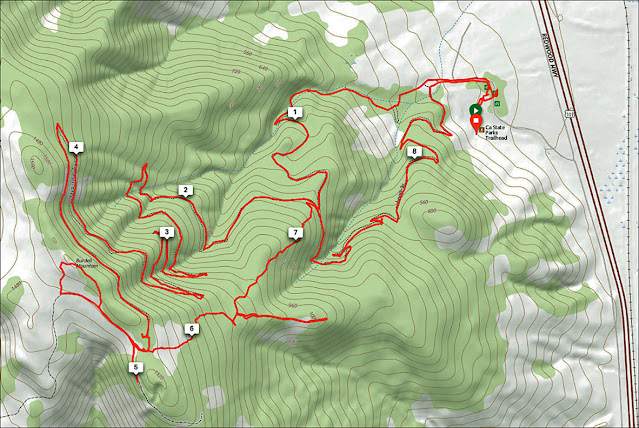 This was the hiking route. The distance traveled was 8.9 miles. The elevation gain was 1,553 feet. Tracking data was recorded by a GPS receiver. 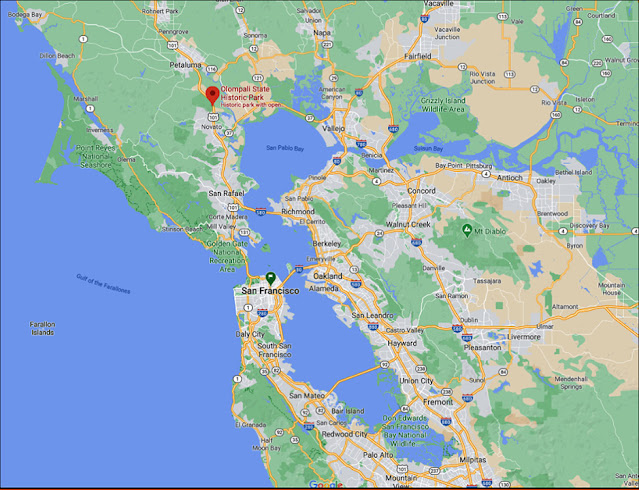 "A camera is a tool for learning how to see without a camera.” Dorothea Lange
"Photography has not changed since its origin except in its technical aspects, which for me are not important." Henri Carter-Bresson
"There are always two people in every picture: the photographer and the viewer." Ansel Adams
"The important thing is not the camera but the eye." Alfred Eisenstaedt
The first volume of the San Francisco Bay Area Photo Blog contains galleries of photographs posted on the Internet between 2002 and 2011. Click Here to view those photos.
A Sony camera was used to take these photographs. 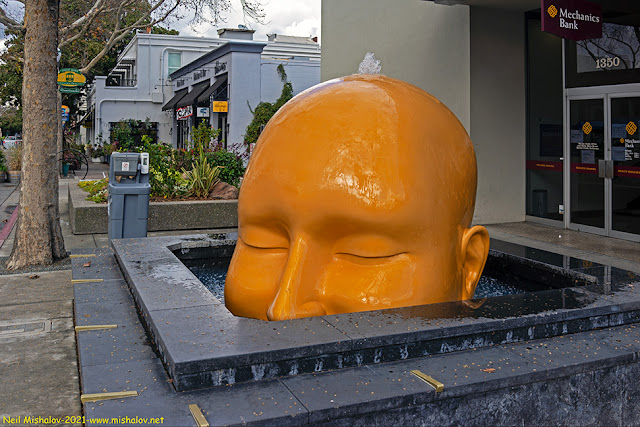