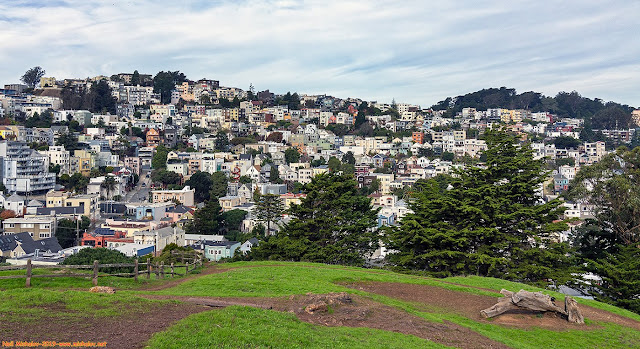 This photograph was taken from Kite Hill, and the view is looking north. The treed area ahead on the right is Buena Vista Park. The hilltop on the left side of the photo is Mount Olympus. 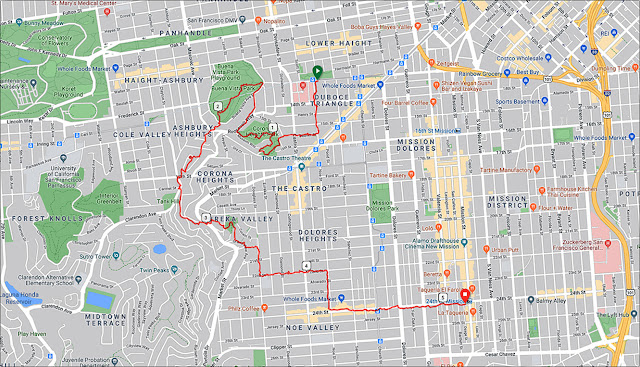 This map shows the route taken, as recorded by a GPS receiver. The approximate distance traveled was 5.1 miles; the approximate cumulative elevation gain was 848 feet. 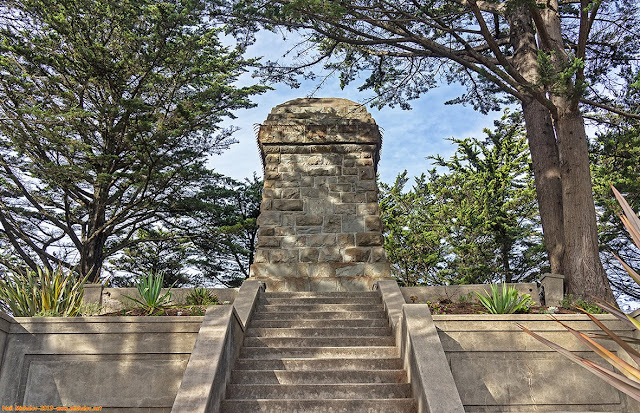 NOW  This is a view of the summit of Mount Olympus. This hilltop has a fascinating history: An empty pedestal is now at the top of the 570-foot hill. From 1887 until 1955, there was a twelve-foot-high concrete statue on top of the now-empty pedestal. Titled “Triumph of Light,” the statue showed Lady Liberty. The statue was given to the City of San Francisco by Adolph Sutro in 1887. The statue remained on the top of Mount Olympus for sixty-eight years, and it had a hard life. The concrete weathered and crumbled; water was causing the statue’s metal support rods to rust, and so in 1955, the city decided to remove the statue because it was deemed to be a hazard. This pedestal is the last remaining portion of the “Triumph of Light” statue installation. Mount Olympus is located near the geographical center of San Francisco. This view is looking northwest. 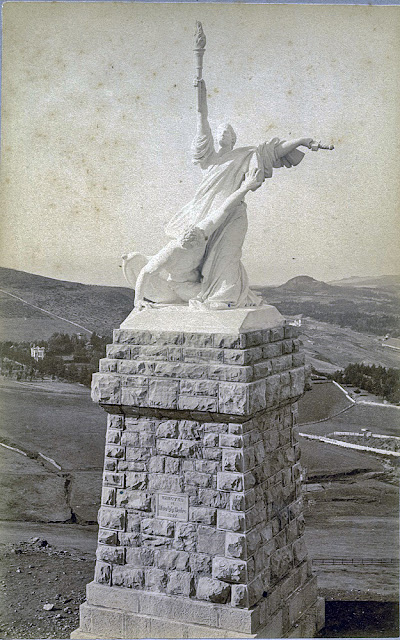 THEN The Triumph of Light Statue as seen on the top of Mount Olympus in 1888. A plaque on the pedestal reads "Erected by Adolph Sutro 1887" This view is looking west across undeveloped Cole Valley. Golden Gate Park and Strawberry Hill are visible in the right background. Thanks to the Western Neighborhoods Project for the use of this photo. 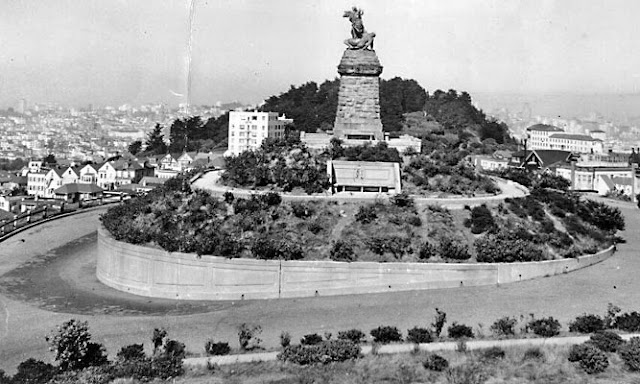 THEN  The Triumph of Light Statue as seen on the top of Mount Olympus in 1947. Buena Vista Park is visible behind Mount Olympus. This view is looking northeast. 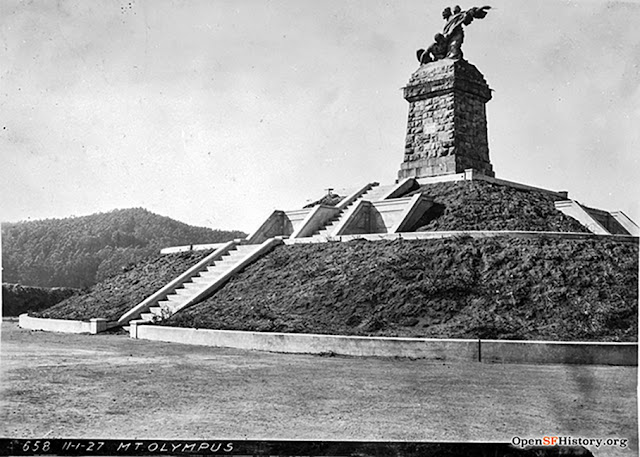 THEN  This is a view of the Triumph of Light statue, as seen in 1927. The treed hill seen on the left is Mount Sutro. Thanks to the Western Neighborhoods Project for the use of this photo. 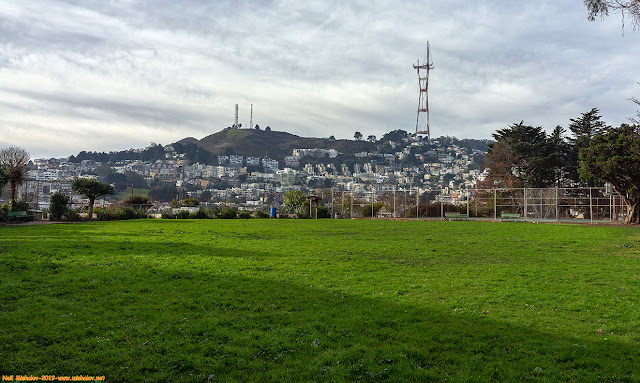 This is a view looking southwest from Corona Heights Park. At the beginning of the 20th Century, this site was the location of a brick-manufacturing factory. The hill was then known as Rocky Hill. There were also several active rock quarries at this hill site to provide the raw material needed for the brick kiln. The rock quarries and brick kiln were owned and operated by two brothers, George and Harry Gray. In 1899 they established the rock quarries and built the brick kiln factory on Rocky Hill. San Francisco needed stones and bricks for building construction, street paving, and other uses. The Gray brothers provided the necessary material. The brothers also operated rock quarries on Telegraph Hill and Billy Goat Hill. The brick-making kiln on Rocky Hill burned down during the 1906 Earthquake and Fire; the rock quarrying continued unabated, and the kiln was rebuilt.

On 10 November 1914, a desperate 36-year-old former quarry worker named Joseph Lococo approached co-owner George Gray to request the $17.50 due him in back wages. The Sicilian immigrant was ill, and he and his family were about to be evicted from the apartment they were renting in the Potrero Hill neighborhood. Also, he, his wife, and their two babies had not eaten for two days. George Gray refused to pay him and told him to get out. Joseph Lococo then pulled out a gun and shot George Gray dead. Lococo was jailed and went on trial for the murder. He was acquitted because of temporary insanity, and he walked out of the courtroom a free man. Harry Gray shut down the rock quarry and brick kiln operation in 1915.

In 1928 Josephine Randall, the Recreation Superintendent of San Francisco, proposed that the city buy the 16 acre Rocky Hill site so that it may be used by the residents of San Francisco as a recreational facility. Rocky Hill was purchased by the city in 1941 and, it was then renamed Corona Heights Park. The Randall Museum, located on the lower southwest side of the hill, opened in 1951. It was the desire of Josephine Randall to create a place where city children could experience “a day in the country" and learn to love natural history, science, and crafts. Today, the museum offers science exhibits, art and ceramics classes, a theater, and a carpentry workshop. The park provides some of the best views of San Francisco. 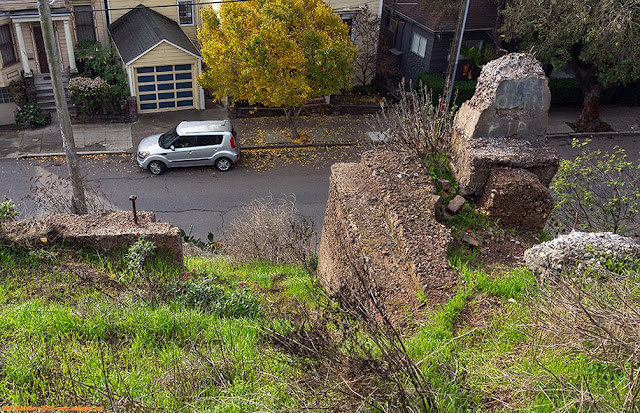 This is all that now remains of the Rocky Hill brick kiln building. This location is adjacent to State Street.

This is a view from Corona Heights Park looking northeast. 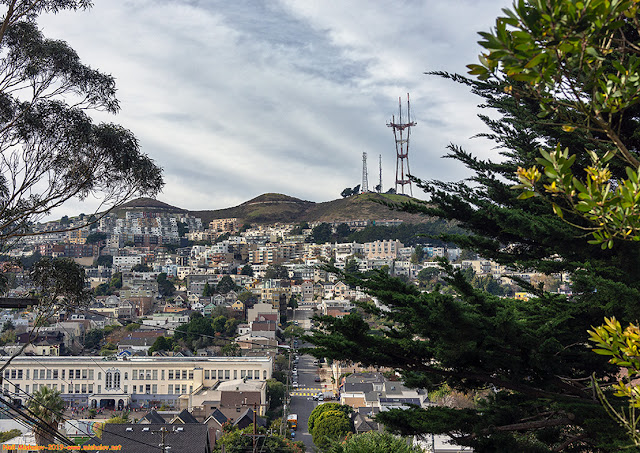 Here is a view of Twin Peaks as seen from the intersection of 22nd Street and Collingswood Street. 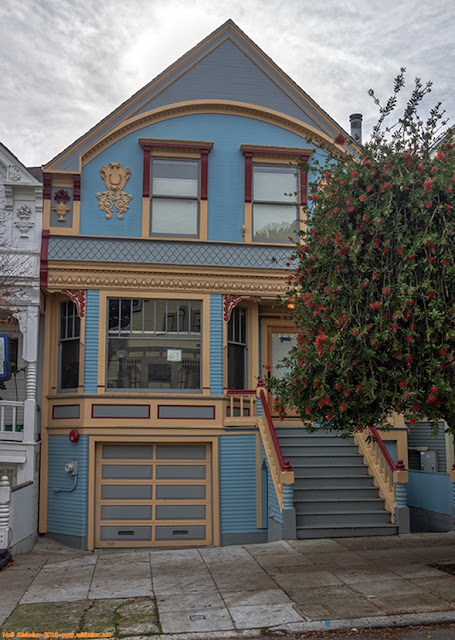 A house in the Noe Valley neighborhood. 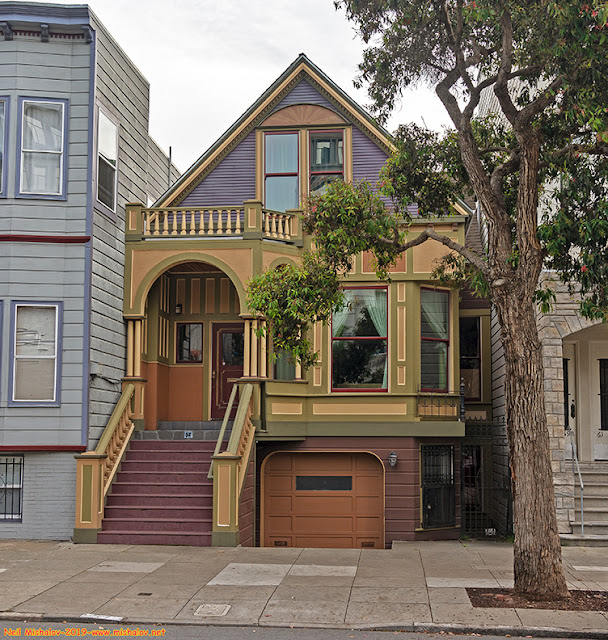 A house in the Duboce Triangle neighborhood. 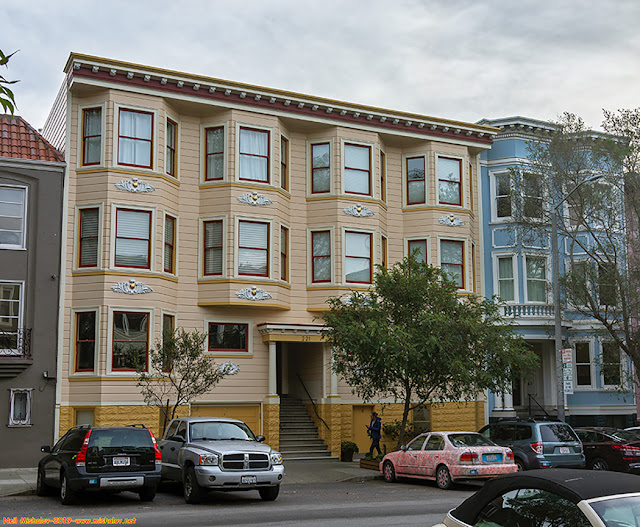 An apartment building in the Duboce Triangle neighborhood. 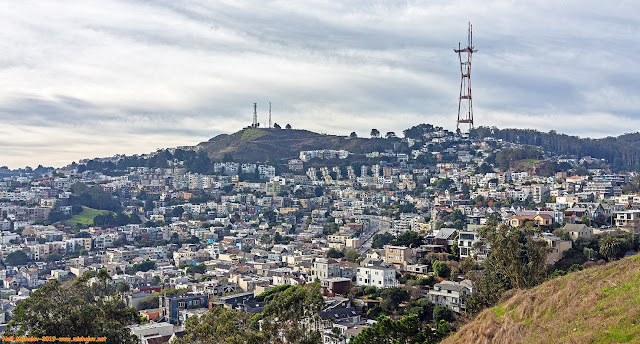 This is a view looking southwest from near the summit of Corona Heights Park. Ahead is Sutro Tower and the Public Safety Radio Towers. 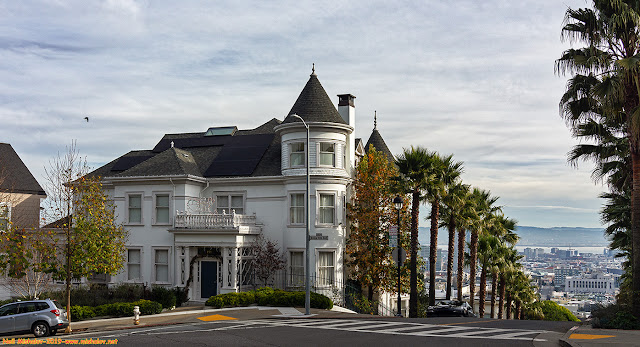 A house near Buena Vista Park. 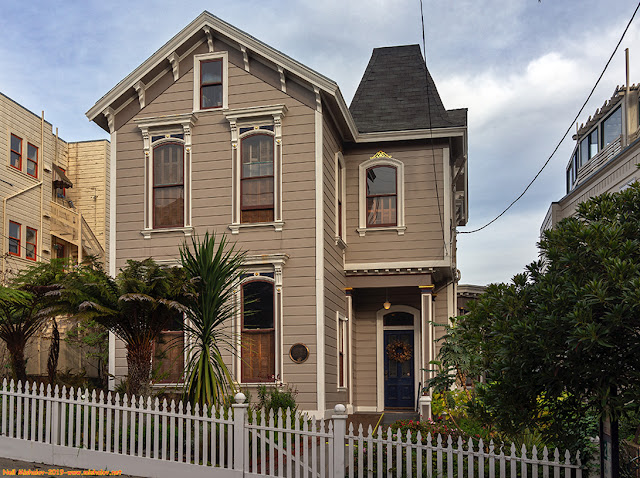 This house is located at 22 Beaver Street. The residence was constructed in 1870 by silver refiner Jacob Benedict. It is an Italianate style dwelling that was erected near Rocky Hill, now known as Corona Heights Park. The home was converted to a boarding house after the 1906 earthquake and later used as a hippie crash-pad. Beginning in 1966, after a change of ownership and years of neglect, the building underwent a decades-long restoration. The property has recently been designated San Francisco Landmark #284.

This is a view from Corona Heights Park looking northwest. The treed area ahead is Buena Vista Park. The large building in front of the park was under construction from 1926 through 1928. It was erected as St. Joseph's Hospital. The hospital closed on 6 September 1979. The hospital building was subsequently converted to its present configuration, a condominium apartment building.
-----------------------
"A camera is a tool for learning how to see without a camera.” Dorothea Lange